Poughkeepsie … Dutchess County’s innovative nutrition project, which provides nutritional education and supplements the diets of two vulnerable populations – inner-city schoolchildren and the elderly – with nutrient-dense microgreens, has been highlighted by the Healthiest Cities & Counties Challenge organizers. 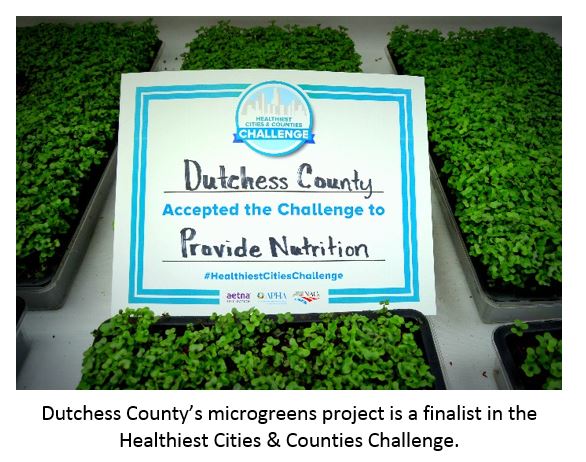 Initiated in 2016, Dutchess County’s nutrition project provides microgreens to fifth-graders at the Krieger Elementary School in the Poughkeepsie City School District and students taking part in the Hudson Valley Community Center’s after-school programs, as well as to seniors throughout Dutchess County who enjoy congregate and home-delivered meals offered by the County’s Office for the Aging. In September 2016, Dutchess County’s microgreens project won a $10,000 community seed award from the Healthiest Cities & Counties Challenge and was named a HealthyCommunity50 finalist, putting the County in the running for a $500,000 grand prize, which will be awarded in late 2018, to support the local program.

Dutchess County’s microgreens project recently received national attention by Healthiest Cities & Counties partners, being highlighted as in a “Community Spotlight” feature on the Challenge’s Learning Network. The County’s collaborators in the project – including Indoor Organic Gardens of Poughkeepsie, the City of Poughkeepsie, the Hudson Valley Community Center and the Poughkeepsie City School District – discussed the project’s progress to date, successes and challenges, and its impact on the community.

County Executive Molinaro said, “A true public-private collaboration, our inventive microgreens project has increased the both number of children and seniors educated in healthy eating, as well as the consumption of nutrient-dense microgreens. This project is making a positive impact on our residents’ health and overall well-being, and we look forward to building on our current successes and expanding the project to benefit even more populations.”

Launched in April 2016, the Healthiest Cities & Counties Challenge is a partnership between the Aetna Foundation, the American Public Health Association and the National Association of Counties. Later this year, the Challenge will award $1.5 million in prizes to small and mid-sized cities, counties and federally recognized tribes that are able to show measurable change over the course of the past two years, working with cross-sector partnerships to implement health innovations and data-driven solutions.

Hundreds of city governments, local municipalities, health departments, educational institutions and other public/private entities applied to be a part of the Challenge. The HealthyCommunity50 finalists, including Dutchess County, were chosen based on plans to improve the health of their communities in at least one of five domains: healthy behaviors, community safety, built environment, social/economic factors and environmental exposures.

Throughout Dutchess County, 6 percent of residents have little to no access to  fresh fruits and vegetables – only six of New York's other 61 counties have a higher percentage – and the City of Poughkeepsie has the highest percentage and the highest poverty rate (15 to 25 percent) in the County. The obesity rates in middle- and high-school youth in the Poughkeepsie City School District are the highest in the County (48 percent).

As such one goal of the microgreens project has been to support students in the City of Poughkeepsie by increasing their access to nutrient-rich microgreens, which offer the same nutritional value as fully grown vegetables. From its inception though late April 2018, the County’s project provided fresh microgreens (approximately one-third of an ounce per serving) as follows: 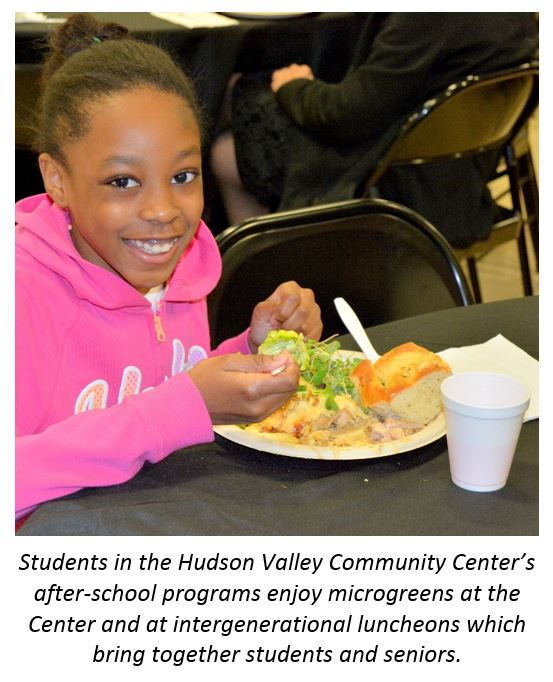 Dutchess County and its partners have also hosted multiple educational events, teaching students and seniors alike the benefits of a nutritious diet, the nutritional value of the microgreens they’re consuming, and how to grow their own microgreens at home – they receive a starter kit of seeds and soil – to ensure the sustainability of the project. Among the events have been several intergenerational luncheons, bringing together the students and seniors to lean about microgreens, plant and harvest them, and enjoy them in various ways – everything from mixed in salads and atop chicken alfredo, to blended in fruit smoothies and infused in ice cream.

Anil K. Vaidian, MD, MPH, Commissioner of the Dutchess County Department of Behavioral & Community Health, said, “The most exciting part of this project has been the reaction of the children and the seniors to the introduction of microgreens in their lives and their responses to the learning about eating and growing microgreens. It is quite an honor to be counted among the 50 communities in the U.S. who have made a commitment to making their county the healthiest it can be. The breadth and depth of public health initiatives to improve outcomes, teach healthy behaviors and prevent unhealthy practices is inspiring.”