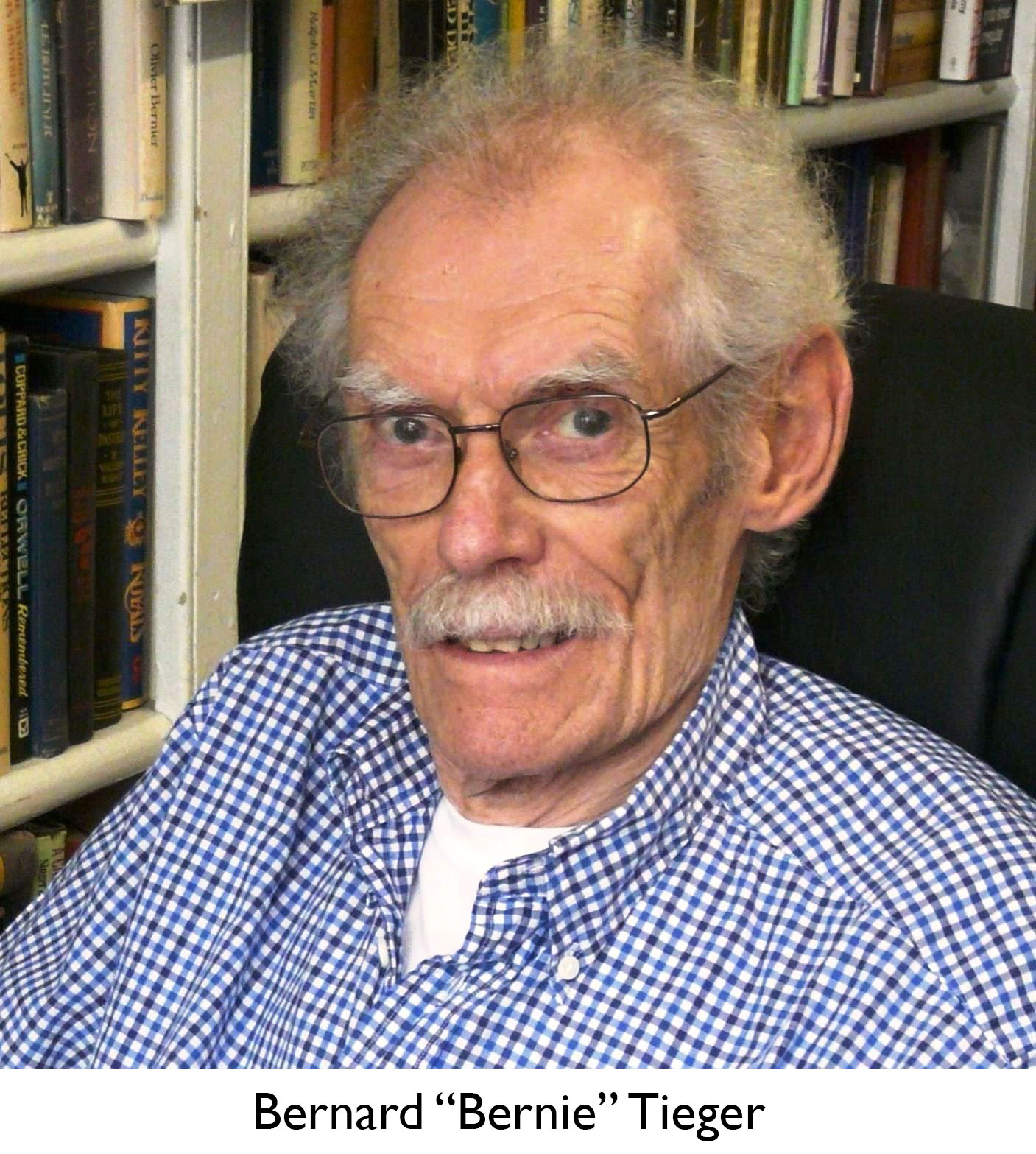 Dutchess County Executive Marcus J. Molinaro and Village of Tivoli Mayor Joel Griffith joined the Tivoli community this morning, June 25th, to celebrate the recent reconstruction of the Broadway Bridge (County bridge RH-25) and its dedication in memory of past Tivoli Village Trustee and Historian, Bernard “Bernie” Tieger. The bridge dedication pays tribute to the man who served his community for a number of years and was instrumental in planning the Village’s centennial celebration in 1972.

County Executive Molinaro said, “Bernie Tieger served the Tivoli community with a fierce loyalty and tireless passion. His enthusiasm was contagious, sparking a growing pride in everyone he met. This bridge acts as a gateway into this historic village that so many will see each and every day and stands as a reminder to us all to carry on his memory by working together to build a bright future for Tivoli residents and visitors.”

Bernard "Bernie" Tieger was born in the Bronx in 1929.  After attending City College and New York University, Tieger moved to Tivoli with his family in 1967 to teach sociology at Bard College.  Fascinated by the dynamics of rural village life, and especially the idea of community, Tieger quickly became civically involved.  He served on the Board of Trustees and later as Village Historian. Tieger was instrumental in the conception and planning of the three-day Tivoli Centennial Celebration in 1972, which lit the fuse of community spirit and revived a tradition of creativity and civic pride that continues today.

Mayor Griffith said, “Tivoli is very proud of its historic and creative roots, and that is due in no small part to Bernie’s constant championship of our community’s growth. The residents of Tivoli are very happy with the reconstruction and thrilled to have this bridge stand as a constant reminder of his commitment and love of this village. We are grateful to the Dutchess County Department of Public Works for their hard work and communication throughout the project.” 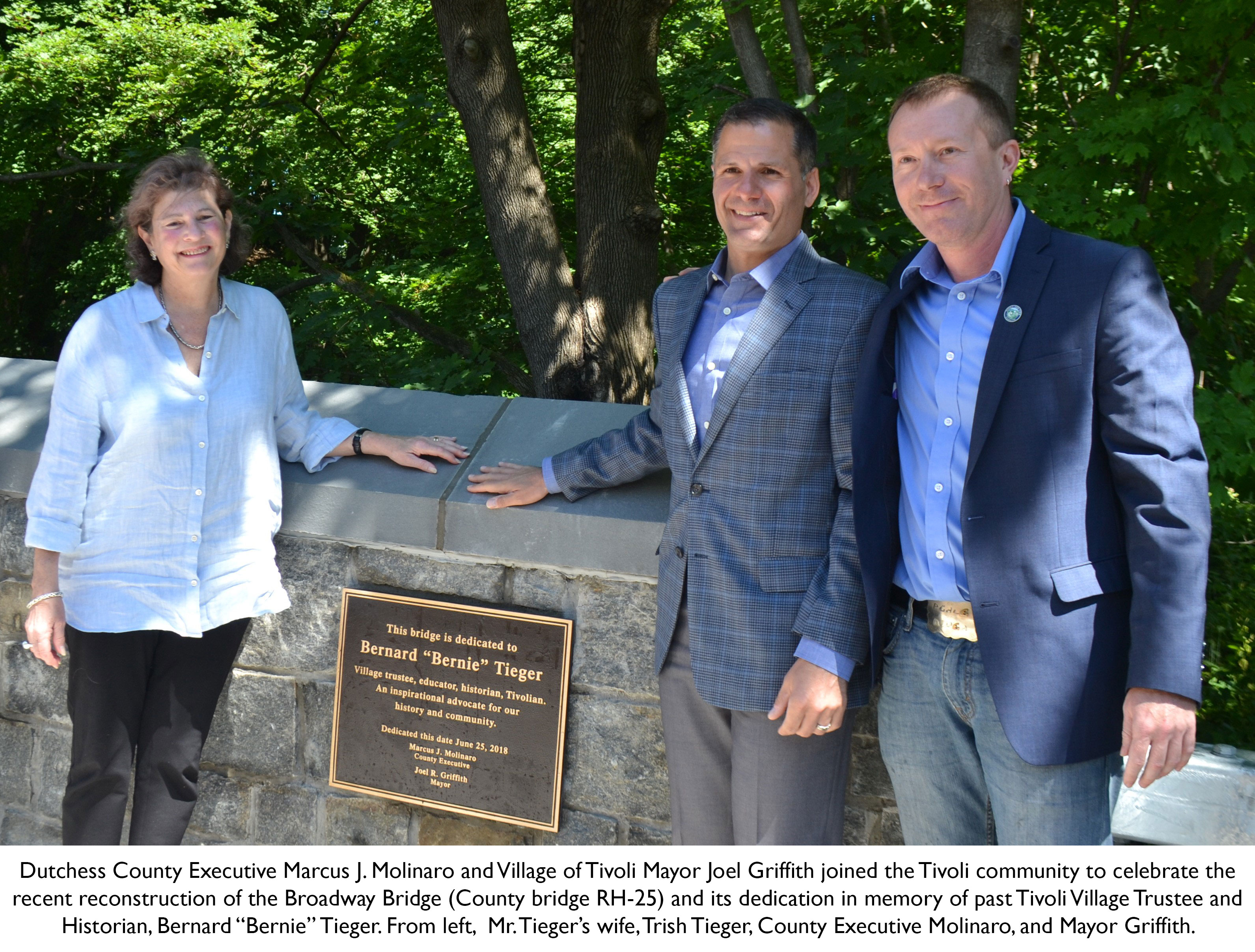 The Dutchess County bridge was completely reconstructed last year. The bridge was originally built in 1929 and was in need of replacement due to structural deficiencies.  Engineers worked closely with the Village of Tivoli to design the bridge to incorporate some of the stones from the original structure and included a stone parapet wall and lighting to maintain the character of the previous bridge. The bridge was also widened to accommodate a wider sidewalk and shoulder area.  Bridge RH-25 averages approximately 2,200 vehicles per day.

The dedication ceremony was attended by elected officials and community leaders, as well as County and Village employees and community members. A plaque honoring Tieger adorning the eastern end of the bridge was unveiled at the ceremony.

Dutchess County Commissioner of Public Works Bob Balkind said, “The County’s Division of Engineering and Highways is honored to join in the celebration of the memory of such a remarkable citizen, and we are proud this bridge will stand for years to come as a testament to his commitment to the community.”