The camp, which takes place from 9:45 a.m. to 1 p.m., is free to local children and young adults with special needs; pre-registration is required. Parents or legal guardians can register their children online, and participants will receive a free camp T-shirt and hat, lunch and beverages. Participants, their immediate family members and caregivers will receive complimentary tickets to the Renegades’ August 19th game at Dutchess Stadium.

County Executive Molinaro said, “Children of every ability deserve the chance to enjoy a summer’s day outdoors, free of obstacles or hindrances, playing alongside friends and simply being a kid. Boys and girls from throughout Dutchess County will get that opportunity as we host our second annual baseball camp, providing them the chance to learn this great game from professional players and coaches in a great minor-league park, our own Dutchess Stadium. We thank Hudson Valley Renegades Team President Steve Gliner and the Dave Clark Foundation for their collaboration in making this weekend of fun possible.” 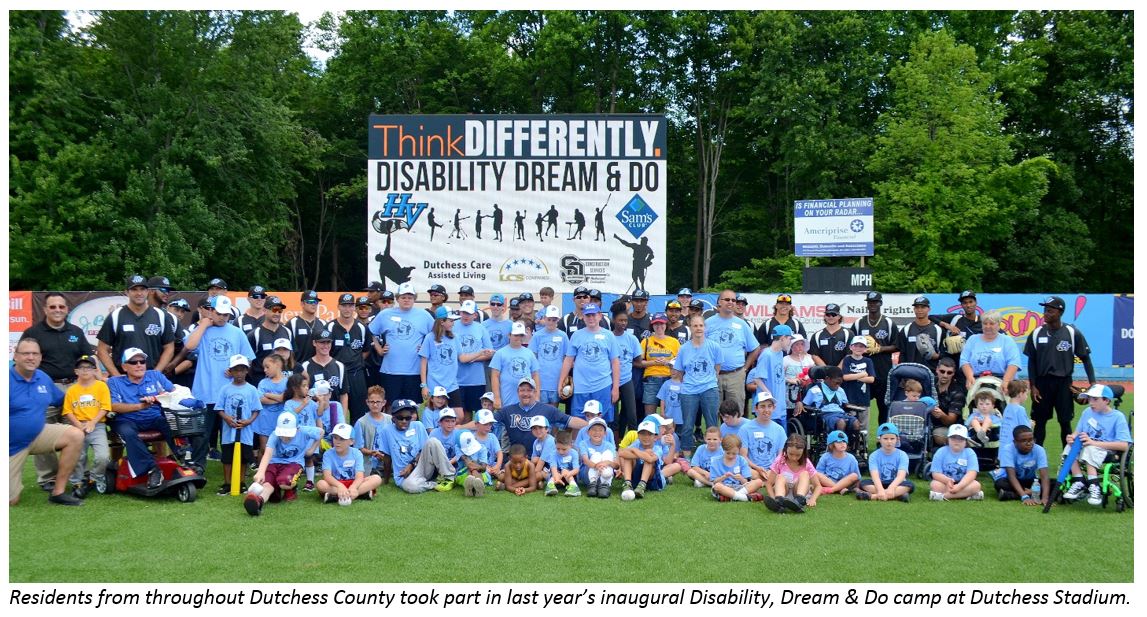 A day filled with throwing, catching and batting fun will give children and young adults of all abilities the chance to learn the game alongside Renegades players and coaches – learning hitting and fielding skills at various stations, as well as participating in a “high-five game” with their fellow campers.

Volunteers are also sought to make the baseball camp as successful as possible. Those looking to give their time on August 18th can sign up online. Sponsorship opportunities are available by calling (845) 475-3578.

The camp will be presented by the Dave Clark Foundation, which operates similar camps throughout the United States. A native of Corning, NY, Mr. Clark was diagnosed with polio as a child but became a professional baseball pitcher, coach, manager, scout, broadcaster and team owner – a career in the game that has lasted more than 40 years. His accolades off the field include receiving the National Giant Steps Award for his coaching and being honored at the White House by President Bill Clinton for his work. Mr. Clark won the National Heroes of Sports Award in 1999 and the Bo Jackson Courage Award in 2011, among other honors.

The Dave Clark Foundation’s Disability, Dream & Do Camps have been nationally recognized, including being named Minor League Baseball’s 2012 Promotion of the Year runner-up.

Mr. Clark said, “We encourage children and their families to come to Dutchess Stadium to enjoy a great day of baseball and friendship. Regardless of their abilities or needs, every child deserves the chance to play and enjoy this great game. Whatever you choose in life, give it all you’ve got. No dream is ever impossible.”

Before returning to the Renegades prior to the 2017 season, Mr. Gliner hosted the D3 Camp for 11 years with his former team, the Fort Myers (Fla.) Miracle. Last year’s inaugural event at Dutchess Stadium attracted more than 75 participants of every ability, as well as dozens of volunteers.

Mr. Gliner said, “We’re thrilled to again collaborate with County Executive Molinaro, the Dave Clark Foundation and its co-founders Dave Clark and Doug Cornfield, and ambassador athlete Dave Stevens to present this tremendous event for Dutchess County residents of every ability. The Dave Clark Foundation’s mission, and that of ambassador athlete Dave Stevens, aligns perfectly with the County’s ‘ThinkDIFFERENTLY’ initiative, and our team is happy to play a role in enhancing the lives of local residents. We look forward to building on last year’s success and hosting even more participants at this year’s camp, which we hope will become an annual tradition at Dutchess Stadium.”

As part of the weekend, organizers will present one local resident with the Pulling Each Other Along Award, which recognizes the notable contributions of those who have selflessly helped others in the disability community. Residents are encouraged to nominate potential honorees online.

Since July 2016, 100 towns, villages and cities throughout New York State have adopted “ThinkDIFFERENTLY” resolutions, pledging to offer a welcoming and supportive environment for individuals of all abilities. Information about Dutchess County’s efforts to “ThinkDIFFERENTLY,” as well as how other communities can adapt the initiative to their specifics needs, is available at thinkdifferently.net.