Nominations Sought for ‘Pulling Each Other Along’ Award
Presented during Disability, Dream & Do baseball weekend, this honor recognizes those who contribute to special-needs community

Poughkeepsie… From service providers and community organizations, to special-education teachers and volunteers, countless residents throughout Dutchess County have chosen to #ThinkDIFFERENTLY and enhance the lives of those living with special needs. Those contributions will be recognized at Dutchess Stadium in August, with the presentation of the “Pulling Each Other Along” Award, part of the second annual Disability, Dream & Do (D3) weekend for children and young adults of every ability. 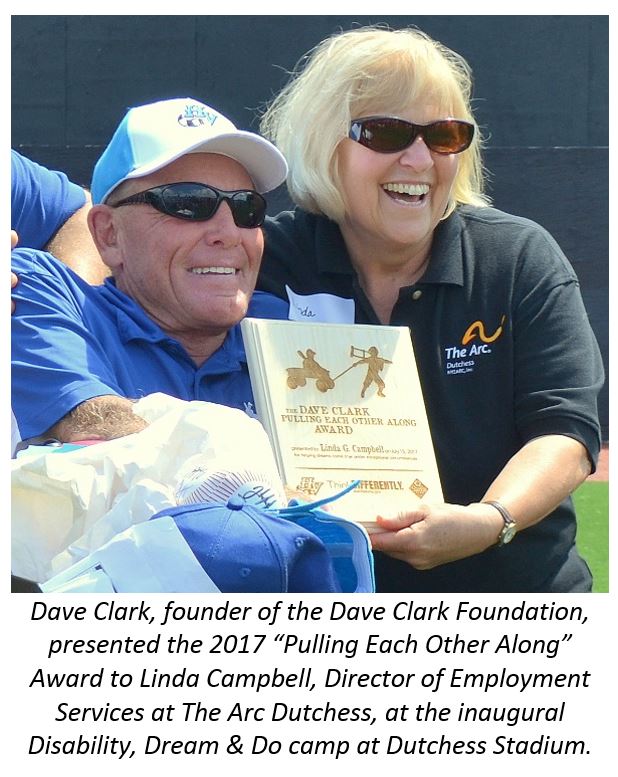 Nominations are now being accepted for the “Pulling Each Other Along” Award, which recognizes the notable contributions of those who have selflessly helped others in the disability community. Presented by the Dave Clark Foundation, the award is a highlight of the D3 weekend at Dutchess Stadium, which includes a free baseball camp for those with special needs on Saturday, Aug. 18 and the award presentation on Sunday, Aug. 19 prior to the Hudson Valley Renegades’ game against the visiting Brooklyn Cyclones.

County Executive Marcus J. Molinaro said, “Dutchess County is blessed to have such a vibrant special-needs community that offers so many resources to help every resident of every ability reach their potential. Behind the services and programs that help residents are devoted men and women who give their time, talent and efforts to improve the lives of the people they touch. The ‘Pulling Each Other Along’ Award recognizes those who continually go above and beyond to help their neighbors with special needs, and we look forward to receiving nominations from throughout our community for this prestigious award.”

The award is presented by the Dave Clark Foundation, which operates the D3 Baseball Weekend. The foundation’s co-founder, Corning native Dave Clark, was diagnosed with polio as a child and needed the assistance of crutches and leg braces to walk. As a first-grader Mr. Clark was filled with anxiety when his class was scheduled to take a field trip, walking several blocks away from their school. A classmate selflessly brought his Radio Flyer wagon to pull Mr. Clark along alongside his classmates. The “Pulling Each Other Along” Award is a testament to the generosity and altruism of those, like Mr. Pound, who contribute to special-needs community.

Linda Campbell, the Director of Employment Services at The Arc Dutchess and an advocate for those with special needs for more than four decades, was the recipient of the 2017 “Pulling Each Other Along” Award at Dutchess Stadium.

Mr. Clark said, “Every community boasts dedicated people who do more than their share to help their friends living with disabilities. Just as my classmate, Ernie Pound, pulled me along, these noble men and women continually give of themselves to help those with special needs. While they often work behind the scenes, our award shines a spotlight on these people and their beneficial work.”

The second annual D3 Baseball Camp at Dutchess Stadium, which takes place on Saturday, Aug. 18, allows children and young adults of all abilities to learn the game of baseball alongside professional players and coaches from the Hudson Valley Renegades, a minor-league affiliate of the American League’s Tampa Bay Rays. Reservations for this free event can be made online at d3day.com; participants will receive a complimentary T-shirt, hat, lunch and tickets to the Renegades’ game on Sunday, Aug. 19.

Renegades Team President Steve Gliner said, “Dave Clark’s inspirational story continues to motivate others to serve, and we look forward to honoring those in Dutchess County who similarly display kindness to those with special needs through their actions.”

Since July 2016, 100 towns, villages and cities throughout New York State have adopted “ThinkDIFFERENTLY” resolutions, pledging to offer a welcoming and supportive environment for individuals of all abilities. Information about Dutchess County’s efforts to “ThinkDIFFERENTLY,” as well as how other communities can adapt the initiative to their specifics needs, is available at thinkdifferently.net.