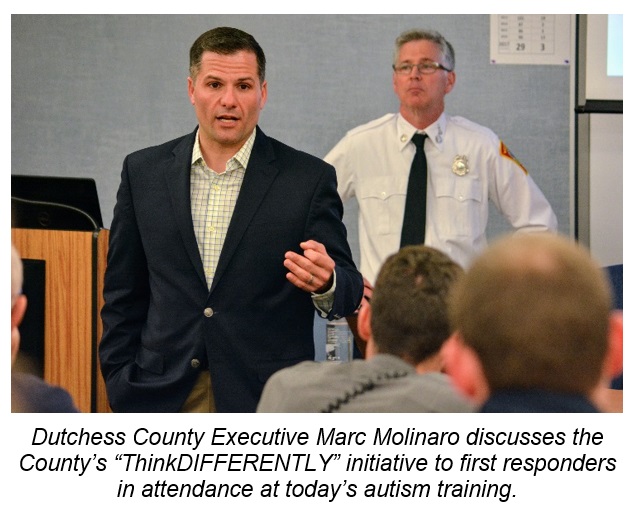 County Executive Molinaro said, “The safety of Dutchess County’s residents – all our residents of every ability – is the County’s paramount concern. By taking part in today’s training, the brave men and women who first come in contact with our neighbors during an emergency learned how to best approach, communicate and safely rescue those living with autism. During an emergency, when every second counts, the lessons learned today will save the lives of those on the autism spectrum. I commend each first responder who answered the call to ‘ThinkDIFFERENTLY,’ and I encourage even more to take this valuable training.”

Those in attendance learned how to identify the characteristics and behavior of a person living on the autism spectrum; how to effectively communicate with someone with autism; how to respond to an emergency involving someone on the spectrum; how to build relationships with the autism community; and how to utilize special tactics, rescue techniques and patient care options in such instances.

Bill Cannata, Coordinator of the Autism and Law Enforcement Education Center, conducted the training. A captain in the Westwood (Mass.) Fire Department with more 35 years of experience as a firefighter, Mr. Cannata is the father of a son who lives on the autism spectrum. He has trained firefighters across the country to be better prepared to rescue people with autism in an emergency, and his efforts have gained national attention from NBC’s “Today” show and Autism Speaks, among others. 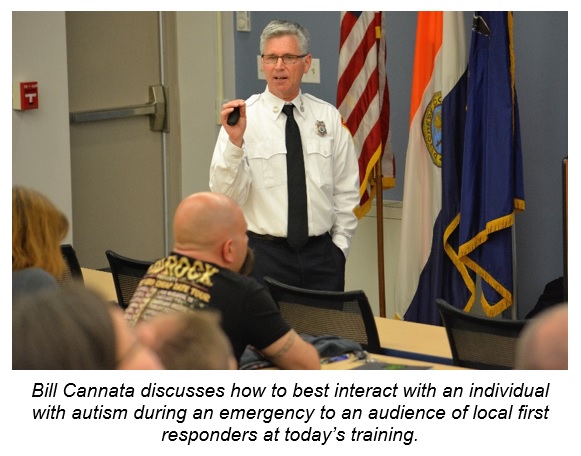 “I thank County Executive Molinaro and Dutchess County for identifying the need to train those who respond to emergencies involving their neighbors living with autism,” Mr. Cannata said. “As both a first responder and the father of a child on the spectrum, I know well the challenges residents with autism face during an emergency, as well as the obstacles encountered by those who respond to such emergencies. Other counties can follow Dutchess’ example and train their first responders to best interact with residents who need their assistance in an emergency.”

Established in 2015, Dutchess County’s “ThinkDIFFERENTLY” initiative promotes a supportive and welcoming environment for those with special needs. Among its other efforts to that end, Dutchess County has trained more than 250 law enforcement officers on the street in crisis intervention training (CIT) – which helps officers to both identify individuals in crisis, including those with special needs, and de-escalate situations to avoid arrests of individuals who can be better served through mental health – and the County plans to train a total of 200 more in 2017.

“Hosting events like today’s training is one of the many ways we in Dutchess County ‘ThinkDIFFERENTLY’ about our neighbors of every ability,” said Toni-Marie Ciarfella, Dutchess County’s Deputy Commissioner for Special Needs. “Residents living with autism may react to an emergency in various ways, and it’s important for our first responders to quickly identify those mannerisms so they can best protect them from danger. Mr. Cannata’s insights will benefit both first responders and those whose calls they answer.”

Special thanks to the Poughkeepsie Grand Hotel and Conference Center, which sponsored Mr. Cannata’s accommodations. More information about Dutchess County’s efforts to ThinkDIFFERENTLY is available at www.thinkdifferently.net.