Poughkeepsie… Joined by fourth-grade students of Joseph D'Aquanni West Road Intermediate School, Dutchess County Executive Marcus J. Molinaro today signed a resolution into law which prohibits the use of polystyrene foam food containers in the County by chain food service establishments. At its October 10th board meeting, the Dutchess County Legislature approved the resolution by a 23-1 vote.

County Executive Molinaro said, “To see the students’ passion for their environment and their willingness to speak up about an issue that concerned them was refreshing and inspiring. I told the class I was proud they had done their research, and I would share the information they gathered with the members of the Dutchess County Legislature. Just a few months later, legislators have passed a resolution that will greatly impact these students, their families and their community.” 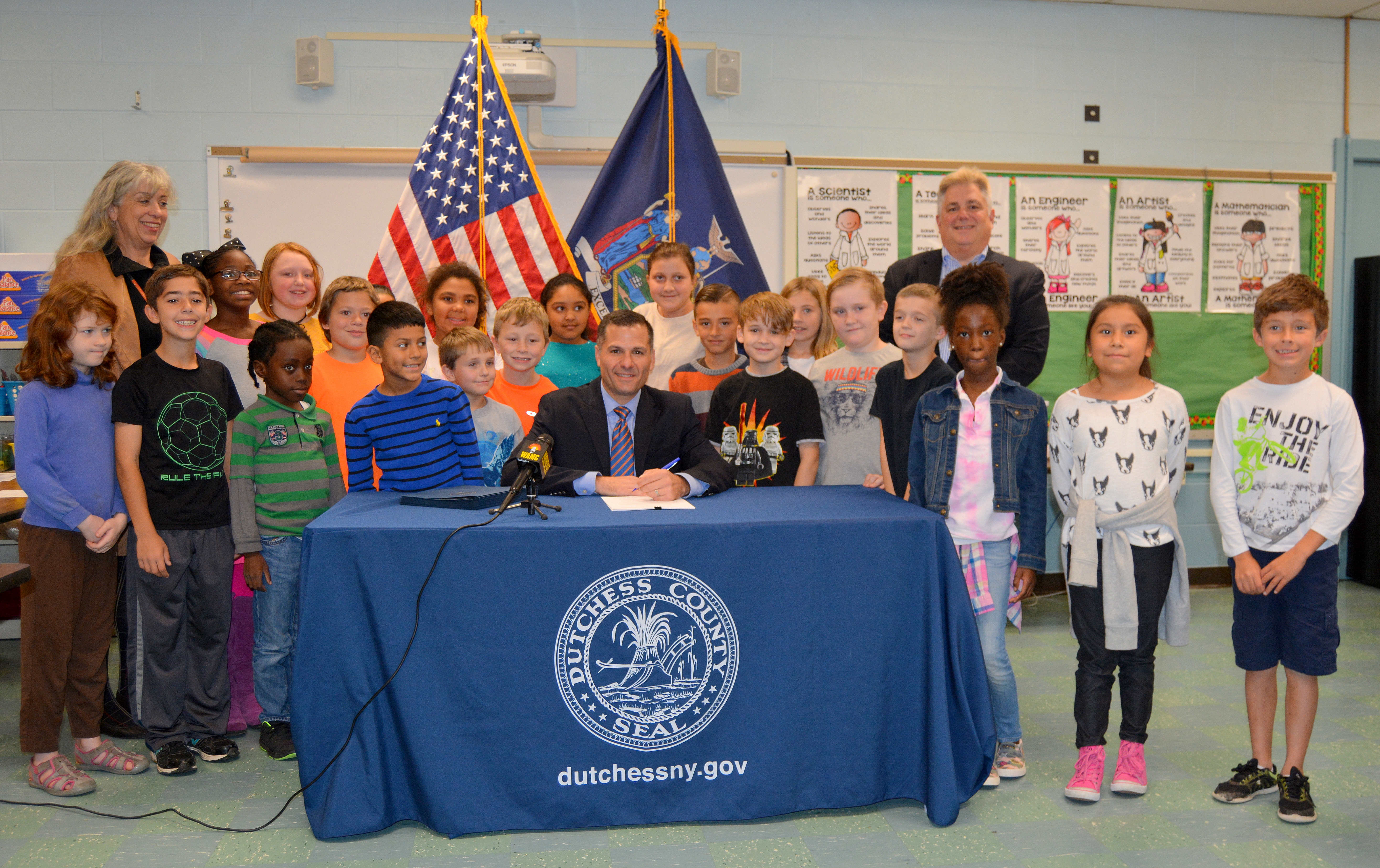 Polystyrene foam, commonly known as Styrofoam, has been identified as a potential human carcinogen by the U.S. Department of Health and Human Services. Polystyrene foam is also poorly biodegradable, has also been historically difficult to recycle and can be toxic when burned.

County Executive Molinaro said, “For years, Dutchess County has taken steps to reduce our impact on the environment by increasing our recycling efforts. Due to polystyrene foam’s inability to easily break down, its use in our community is detrimental to our county’s goal. The health and safety of our residents, as well as the sustainability of our environment, are top priorities for Dutchess County, and this new law is a positive step toward safeguarding our residents and planet.”

The law will take effect immediately and be enforced starting January 1, 2019. It prohibits food chains which have 15 or more locations nationally, operate in Dutchess County, and provide prepared foods for public consumption from selling, packaging or distributing food in polystyrene foam containers – bowls, plates, ups and the like. County government departments and facilities will be prohibited from using disposable food service containers containing polystyrene foam at any county facility or event.

The law does contain exemptions, including an exemption for establishments that demonstrate a gross income below $500,000  and are unable to find a cost-neutral alternative to polystyrene foam food containers.

Under the law, the Commissioner of the Dutchess County Department of Behavioral and Community Health (DBCH) has the authority to administer and enforce the ban. DBCH is responsible for issuing written warnings, levying fines on violators, and granting/denying exemption applications.

The first violation of the law will result in a written warning notice that specifies the penalties in the event of future violations. The DBCH Commissioner may levy fines no greater than $250 for the first offense, $500 for the second offense and $1,000 for the third and subsequent offenses.

Dutchess County Legislator Don Sagliano, one of the sponsors of the resolution, said, “I’m happy my legislative colleagues and I listened to these young voices and addressed an issue that not only impacted them, but our entire county. I appreciate Ms. Kurdziel and her students for bringing the matter to the Legislature’s attention, and I’m proud Dutchess County has such conscientious children who have their community’s best interest in mind.”