‘Year of the Veteran Parade’ to be Held Sept. 30th

Poughkeepsie … Dutchess County Executive Marcus J. Molinaro invites residents of every community to attend the County’s “Year of the Veteran” Parade in the City of Poughkeepsie on Sunday, September 30th at 1 p.m. The parade, which coincides with the 100th anniversary of the end of fighting in World War I, steps off from Market Street, turns west onto Main Street and concludes at Waryas Park, where activities will be held in honor of Gold Star Family’s Day. 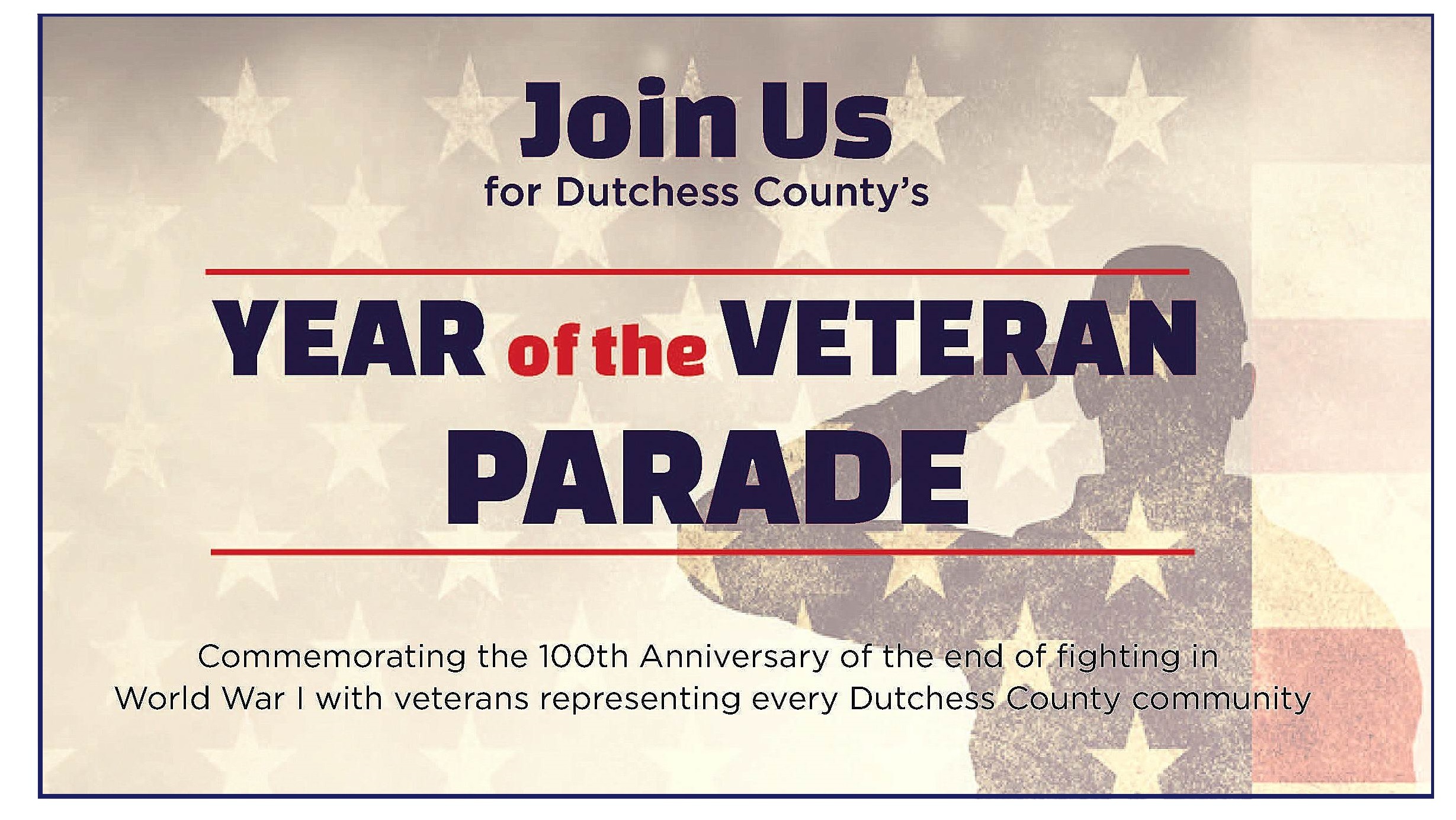 County Executive Molinaro said, “Brave men and women from throughout Dutchess County have defended their neighbors for generations through their service to our country. Dutchess County is proud to celebrate its courageous sons and daughters and host this parade, a true community event, in their honor. I urge every County resident to line the parade route on Sept. 30th and pay respect to the countless local servicemembers who have safeguarded our liberty and our American way of life.”

Major General Fergal Foley (US Army, Ret.) will serve as Grand Marshal of the parade. Major General Foley served as Executive Officer of the National Guard Regional Training Institute from 1996 to 1999; was assigned as Deputy Brigade Commander from 1999 to 2003; was selected for Brigade Command in New York City and later assigned as the Facility Manager for a National Guard Training Base until his retirement in 2006. He was later issued his second star, Major General, by Gov. David Patterson.

Veterans from every community throughout Dutchess County will walk or ride in the parade, as well as many groups and organizations, including the East Coast Doughboys, Jewish War Veterans of the United States of America, the Purple Heart Foundation, Air Force Junior Reserve Officer Training Corps (ROTC), the Hudson Valley Alumni Guard and the Spackenkill High School Marching Band, among others.

In 1919, thousands of Dutchess County residents lined Main Street as then-Assistant Secretary of the Navy and Hyde Park native Franklin D. Roosevelt, who would later become the 32nd President of the United States, led a parade of local servicemembers home from the battlefront.

Dutchess County Division of Veterans’ Services Director Marc Coviello said, “Our ‘Year of the Veteran’ Parade is a unique opportunity for our community to give back to the valiant men and women who have given so much to our County and our nation. It’s a perfect chance for residents of all ages to thank Dutchess County’s many veterans, and it’s a great chance for children, in particular, to learn about the hard work and courageous sacrifice that has built our country and kept us free.”

Gold Star Family’s Day, which honors mothers and families who have lost a son or daughter in service to our country, is observed nationally on the last Sunday in September; this year, it will be observed on Sept. 30th. At the conclusion of the parade, onlookers are invited to a recognition for Gold Star Families, including those in Dutchess County, which will be held at Waryas Park; spectators are welcome to stay for a touch-a-truck event with military vehicles, live music and games, among other entertainment.

City of Poughkeepsie Mayor Rob Rolison said, “Our city is proud to host the ‘Year of the Veteran’ Parade and welcome participants and onlookers of every age. I hope residents from every community in Dutchess County will come honor these men and women, as well of the service they’ve provided our nation.”

County Executive Molinaro announced the “Year of the Veteran” Parade in his 2018 State of the County Address. The parade is the culmination of months of preparation and collaboration by several County departments and divisions, such as the departments of History and Emergency Response, as well as community partners, including the City of Poughkeepsie.