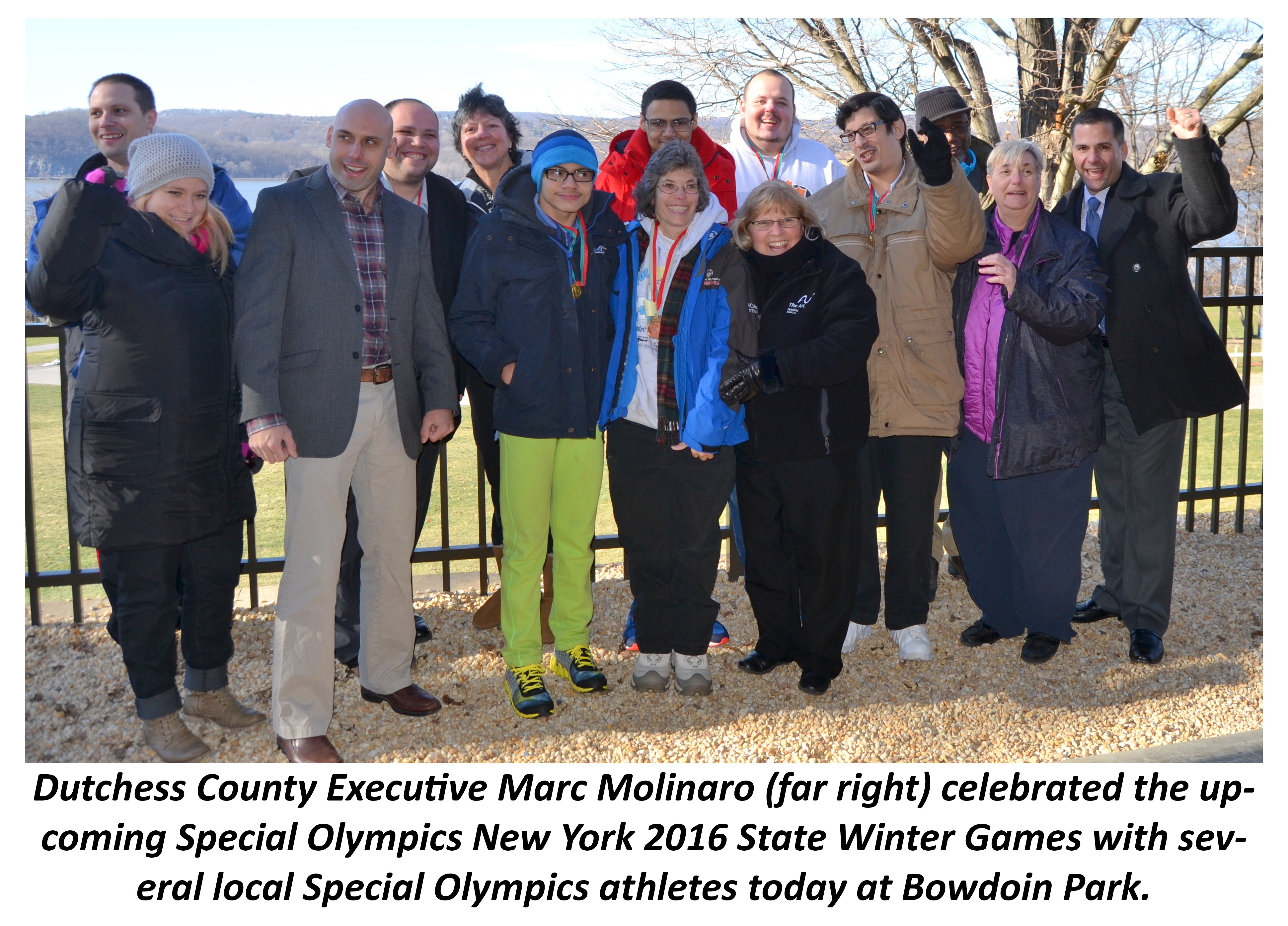 “We have been overwhelmed with the support the Hudson Valley has shown both Special Olympics New York and the athletes from around New York who will arrive here next month for the 2016 State Winter Games,” Mr. Johnson said. “These athletes will be the beneficiaries of the hard work and dedication of countless individuals – from local officials and the Games Organizing Committee, to hundreds of volunteers who have selflessly given their time – and they’ll enjoy a weekend of competition and camaraderie they’ll never forget. We thank all who have worked to make the 2016 Winter Games the success we all know they will be.”

County Executive Molinaro is the Honorary Chair of the 2016 State Winter Games. The Games Organizing Committee (GOC) is organizing the various aspects of the event, securing local community support and sponsorship, and working to provide a unique Hudson Valley feel to the Games. The Co-Chairs of the 2016 State Winter Games GOC are Mary Kay Vrba, president and CEO of Dutchess Tourism Inc., and Frank M. Castella Jr., president and CEO of the Dutchess County Regional Chamber of Commerce.

County Executive Molinaro said, “We are thrilled for the opportunity to host the 2016 Special Olympics New York State Winter Games next month and show how we in Dutchess County THINK DIFFERENTLY about people of all abilities. Each day, these athletes inspire each of us to overcome obstacles and challenges, and next month we’ll cheer for them as they strive to achieve – whether that means winning a medal, simply competing, or making new friends. Dutchess County is proud to play a large role in providing these athletes and their families an experience they’ll long cherish.”

“The local response to hosting the 2016 Special Olympics New York State Winter Games has been even better than we could have hoped for, and we appreciate the support we’ve received from businesses and volunteers alike,” Mr. Castella said. “Athletes and their families will be able to enjoy the State Winter Games at no cost – a tribute to the generosity of our local hotels, competition venues and other partners.”

Special Olympics New York is still in search of social volunteers to be Fans in the Stands for the weekend.  Athletes will come to the State Winter Games from all over New York, and many families cannot make the trip.  Volunteers from the community are needed to attend the competitions, watch and cheer for these champions.  For more information, or to Volunteer to Cheer, visit www.SpecialOlympicsNY.org.

“Part of what makes us distinctly Dutchess is the benevolent spirit of our residents, and the outpouring of volunteers has been truly inspiring; we reached our goal of 750 service volunteers early last month, the culmination of a record turnout,” Ms. Vrba said. “As the Winter Games approach, we’re confident local businesses, organizations and teams will sign up en masse to similarly give their time, rooting for these athletes and giving them a big-league experience amid the hometown charm the Hudson Valley has to offer.”