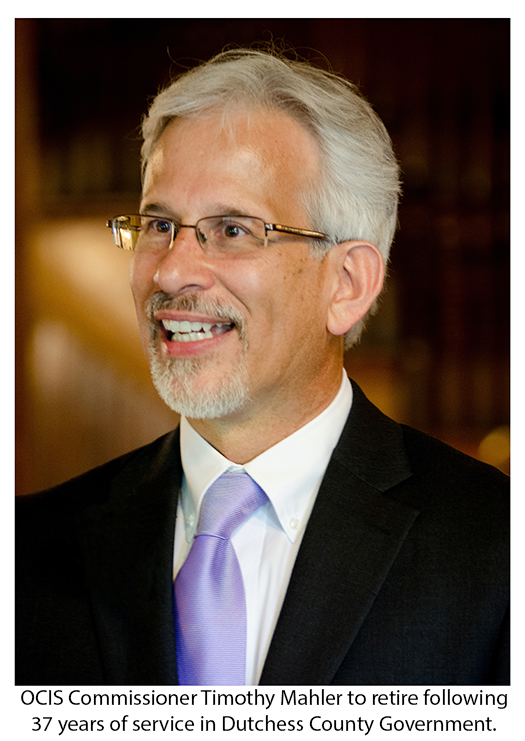 County Executive Molinaro said, “Dutchess County is recognized across New York State and the nation for its technological innovation and applications, and that is thanks to the work of Tim Mahler.    Over nearly four decades, Tim has guided OCIS through tremendous advancements in computer and information technology and has ensured Dutchess County is always providing the best service and innovation possible for our residents.   We are grateful for his service and wish him the very best as he ends his county career.”

Mr. Mahler began his career with Dutchess County Government in 1979 as a Computer Programmer.   He advanced to Project Leader, overseeing Public Safety/Criminal Justice applications development, and was later promoted to Systems Manager in 1988 where he provided oversight for applications development as well as OCIS business administration. In 2003, he was appointed OCIS Commissioner by former County Executive William R. Steinhaus.

As OCIS Commissioner, Mr. Mahler has been responsible for setting the direction and overseeing all County computer services. This includes automation for County departments, Information Technology (IT) shared services for local municipalities and public facing web services such as the County’s award winning website www.dutchessny.gov and all its 24/7 applications including ParcelAccess and the County Clerk Document Search.    Commissioner Mahler has led OCIS through significant technological system changes and advancements, including the major decision to convert from a mainframe-centric to an advanced server computer environment in the mid-2000s.  This intensive undertaking involved the OCIS team successfully re-hosting a portfolio of more than 60 applications to windows and web-based platforms and it set the stage for many County technology advances and services to the public.

In 2013, Commissioner Mahler’s responsibilities expanded beyond IT Computer Services, with the merger of the Office of Computer Information Services and the Department of Central Services, as part of County Executive Molinaro’s efforts to transform county government to be smaller, smarter and more effective.   The Division of Central Services is responsible for the County’s central purchasing, contract administration, telecommunications, duplicating and printing, inventory control, central billing, office supplies, supply delivery and mail services.

Under Commissioner Mahler’s leadership, the OCIS team has undertaken numerous initiatives and has a wide range of accomplishments, including several on a national scale.

Commissioner Mahler’s service in Dutchess County Government has extended well beyond OCIS and he has been involved in many countywide policy decisions and initiatives including:

Mahler is also a member of New York State Local Government IT Director’s Association (NYSLGITDA) and is well respected throughout the state for Dutchess County OCIS’ innovation and advanced IT services.

Commissioner Mahler is quick to note that it is the tremendous team at OCIS that has made all of these accomplishments possible - in particular, Deputy Commissioner Grant Hait, who oversees all network and infrastructure projects.   This has allowed Mahler to focus on the application service areas, business end of the OCIS operation and external projects such as County Shared Services.

Mahler extended his appreciation to Mr. Hait saying, “My special thanks to OCIS Deputy Commissioner Grant Hait, who will also be retiring in the coming months after 38 years of service. His dedication and contributions to OCIS and the County are immeasurable. Grant and I have partnered on countless projects over the past four decades. He’s been a great collaborator and best friend.”

“I’m so grateful for the opportunity to serve as the OCIS Commissioner for the past 13 years, and having such a long County career being able to do what I love to do while providing public service.  OCIS work would not be possible without the great support of County Executive Molinaro, Deputy County Executive William O’Neil and the County Legislature. County leaders, including Executive Molinaro and former Executive William Steinhaus, have always recognized the importance of IT Services and have championed OCIS initiatives. Most importantly, I’ve been blessed with having dedicated and innovative staff across the OCIS Central and Computer Services divisions.   I know they will continue their great work and I look forward to all that comes next,” said Mahler.

Mr. Mahler, who resides in the Town of Pleasant Valley with his wife, Val Sommerville, plans to enjoy traveling with his wife, time with family and friends and pursuing his many interests, including architectural woodworking, landscaping and cycling.  Mr. Mahler will officially retire at the end of May, 2016.