Poughkeepsie…The annual reorganizational meeting of the Dutchess County Supervisors and Mayors Association was held last night at the Department of Emergency Response, located at 392 Creek Road in the Town of Hyde Park. Close to 20 newly elected and returning supervisors and mayors representing 16 municipalities attended the meeting. The Dutchess County Department of Emergency Response hosts the reorganizational meeting annually in January to provide an overview of the department’s functions and procedures as well to ensure each local official understands their role and responsibilities during an emergency situation, such as a snow storm, flood or other event. 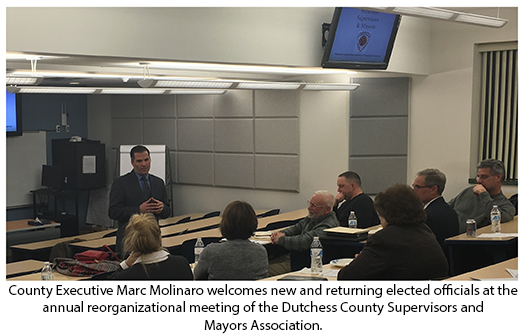 County Executive Marcus J. Molinaro said, “I enjoyed welcoming our newest supervisors and mayors last night, as well as several of our returning officials. Our Emergency Response Department provides critical information and services to our residents, and this session is crucial to educating and informing our chief elected officials on appropriate protocol during an emergency situation.”

As part of the meeting, officials reviewed NYS Executive Law Article 2b, governing the responsibilities of the municipality’s Chief Elected Official during a disaster or emergency. Officials also reviewed the Intrastate Mutual Aid Program (IMAP), a program created by the NYS Legislature in 2010 that authorizes participating municipalities to share resources during a local declared state of emergency. Additionally, county officials provided a synopsis of the Citizen’s Preparedness Initiative, designed to provide participants with the tools and resources to better prepare for any type of disaster.  Participants learn how to respond accordingly in a disaster and recover as quickly as possible to pre-disaster conditions. Local officials had the option to schedule their own Citizens Preparedness Training at their town, city or village hall. At the conclusion of the meeting, officials were given the opportunity to tour the Emergency Response facilities. 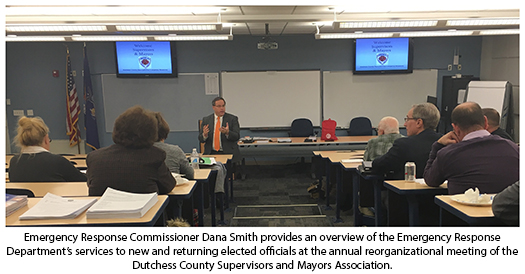