Poughkeepsie… The Collings Foundation’s popular WINGS OF FREEDOM TOUR returns to the Dutchess County Airport on Friday, September 9th through Sunday, September 11th.  The tour features rare treasures of aviation history including the Boeing B-17 Flying Fortress “Nine O Nine” WWII Heavy Bomber, Consolidated B-24 Liberator “Witchcraft” WWII Heavy Bomber, North American B-25 Mitchell “Tondelayo”, and WWII P-51C Mustang dual-control fighter.  The B-17 is one of only 8 in flying condition in the United States and the B-24J and Full Dual Control P-51C Mustang are the sole remaining examples of their type flying in the world. A memorial ceremony will be held at 11:00am on Sunday, September 11th, to remember and honor the victims, survivors and heroes of the September 11th terrorist attacks. 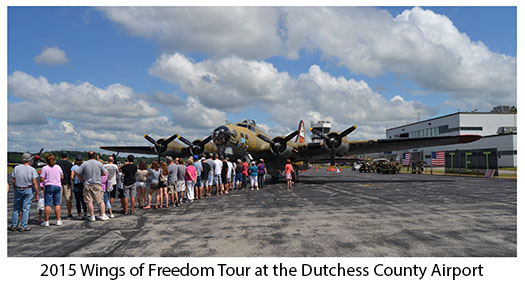 “The Wings of Freedom Tour has drawn thousands to our own Dutchess County Airport in previous years and we are excited to once again host this remarkable living history exhibit. This event allows our veterans and their families, as well as adults and children of all ages, to learn about these historical and truly remarkable aircraft, and their significance in our nation’s history. We look forward to welcoming back the Collings Foundation and hosting this special tour in Dutchess County,” said Dutchess County Executive Marc Molinaro.

Visitors to the airport will be provided a unique and rare opportunity to explore these aircrafts inside and out. Tour prices are $12 for adults and $6 for children 12 and younger. WWII Veterans can tour through the aircraft at no cost.  Discounted rates are also available for school groups. The WINGS OF FREEDOM TOUR hours are as follows:

Dutchess County Airport Director John Mouris said, “This will be the third year in a row the Wings of Freedom Tour has come to the Dutchess County Airport. While the Collings Foundation does not typically schedule repeat appearances, when they had an opening in their schedule, they opted to return to Dutchess based on the great reception they have received on their prior visits and we are thrilled to welcome them back!”

The Collings Foundation is a 501c3 non-profit educational foundation devoted to organizing and supporting “living history” events that enable Americans to learn more about their heritage and history through direct participation. The nationwide WINGS OF FREEDOM TOUR is celebrating its 27th year and has made more than 3,000 visits to airports across the country. 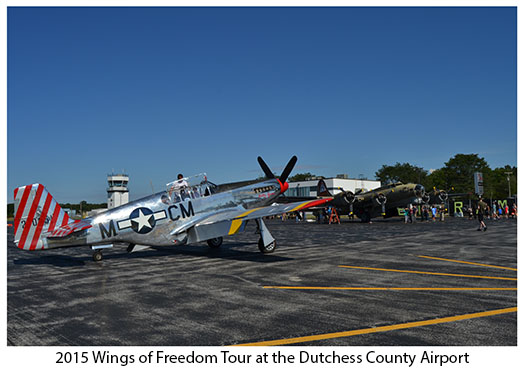 The WINGS OF FREEDOM TOUR travels the nation as a flying tribute to the flight crews who flew them, the ground crews who maintained them, the workers who built them, the soldiers, sailors and airmen they helped protect; and the citizens and families that share the freedom that they helped preserve. The B-17 & B-24 were the backbone of the American effort during the war from 1942 to 1945 and were famous for their ability to sustain damage and still accomplish the mission. Despite the risks of anti-aircraft fire, attacking enemy fighters, and the harrowing environment of sub-zero temperatures, many B-17s and B-24s safely brought their crews home. One of America’s most famous medium bombers, the B-25 was known for its adaptability and reliability under any combat circumstance, including as a ground attack aircraft and low-level bomber. The B-25 is most notable for the Doolittle Raid on Japan, the first American attack made on the Japanese mainland after the attack on Pearl Harbor. The P-51 Mustang was affectionately known as the bombers “Little Friend” – saving countless crews from attacking axis fighters. After the war, many aircraft were scrapped for their raw aluminum to rebuild a nation in post-war prosperity and therefore very few were spared. The rarity of the B-17, B-24, B-25 & P-51 and their importance to telling the story of WWII is why the Collings Foundation continues to fly and display the aircraft nationwide. The tour allows for local veterans and their families to visit and share their experiences and stories with the public, particularly younger Americans. For aviation enthusiasts, the tour provides an opportunity for the museum to come to the visitor and not the other way around! Visitors can find out more by visiting the Collings Foundation website at http://www.collingsfoundation.org/.

For further information, e-mail Hunter Chaney, Director of Marketing, at hchaney@collingsfoundation.org or 800-568-8924.