Poughkeepsie…The Dutchess County Department of Public Works (DPW) has announced work to replace Bridges PP-2 and PP-11, also known as the Patchin Mills Bridge, on Hoffman Road in the Town of Pine Plains and Bridge PV-15 on North Avenue (CR 72) at the intersection with Sherow Road (CR 73) in the Town of Pleasant Valley is complete.

“As our DPW Engineering Division team finishes up the last bridge and road projects of the season, we extend our thanks for their tireless efforts over the last several months to complete these projects on schedule and within or under budget. These improvements to our highway infrastructure will have a lasting impact on the overall safety and ride-ability of our county’s roadway system for years to come,” said Dutchess County Executive Marc Molinaro.

The Hoffman Road bridges, located over the Shekomeko Creek, were replaced due to significant structural deficiencies.  Project work began in the summer and included the replacement of both existing bridges and abutments with a single, two-span bridge, including new stone-faced parapets, bridge rail, lighting, approach pavement and expanded shoulders. Both bridges average approximately 530 vehicles per day. The project was completed on time and under budget. 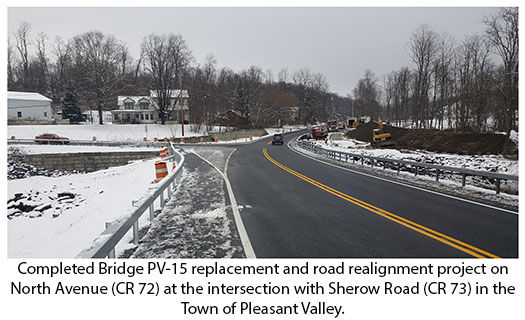 Bridge PV-15, located over the Great Spring Creek on North Avenue (CR 72) at the intersection with Sherow Road (CR 73), was replaced due to significant deterioration of the bridge’s substructure, including its foundation. Project work began in the spring; however, unforeseen delays were experienced that halted project work for an extended length of time. As part of the bridge replacement project, several safety improvements were made including the installation of new bridge rail and widening of the bridge structure. As part of the project, North Avenue and Sherow Road were realigned to the east to significantly improve the sight distance at the intersection of both roads. Additionally, North Avenue was raised four feet at the intersection with Sherow Road to increase safety during inclement weather conditions. North Avenue averages approximately 5,450 vehicles per day.