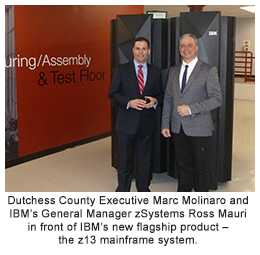 Poughkeepsie… Dutchess County Executive Marcus J. Molinaro was at IBM’s Poughkeepsie location this morning for an up close look at IBM’s new flagship product – the new z13 mainframe system. The new system began shipping to clients this morning from Poughkeepsie, where it is being manufactured. The z13 system is the result of IBM’s $1 billion investment and five years of development, and includes more than 500 innovative new patents. According to IBM’s Ross Mauri, General Manager zSystems, IBM Poughkeepsie is the “center of the universe” for the z13, with the majority of the IBMers who designed the system employed at the Poughkeepsie site. Mauri noted, “The IBM engineers here in Poughkeepsie are unique in the world, with a mixing of skills that is not seen elsewhere in the world.”

The new z13 system technology, which features the world’s fastest microprocessor, is a huge step forward for mobile transactions. In the past 10 years, mobile transactions per day per user have increased by 37x. A single touch transition by a 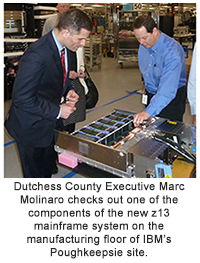 consumer on their mobile device can trigger tens to hundreds of back end transactions for businesses, leading to strain on technology systems and concern about security. The new z13 system is designed to address these issues, with the capability of processing 2.5 billion transactions per day - the equivalent of all of 2014 Cyber Monday transactions times 100 in a secure, stable environment provided by mainframes.

County Executive Molinaro said, “This is an amazing integration of technology, investment, innovation and human capital, all brought together right here in Dutchess County. It was inspiring to meet the bright, young millennial engineers working on this project, alongside the talented IBM veterans, all working to continue IBM’s legacy of innovation in the global marketplace.”