Poughkeepsie...The Pace Land Use Law Center today honored Dutchess County Executive Marcus J. Molinaro as this year’s recipient of the Groundbreaker’s Award.  The Groundbreaker's Award is given to a graduate of the Center's Land Use Leadership Alliance (LULA) Training Program who has done exemplary work in a community or region using the types of land use and decision-making tools and techniques taught in the LULA program. 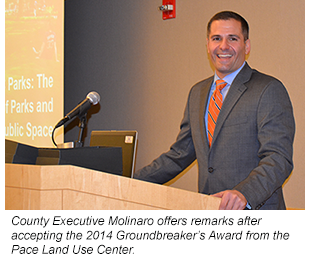 County Executive Molinaro was selected from a prestigious group of other past LULA graduates nominated for this award and chosen for his dedication to public service and his efforts in communication and collaboration between regional partners and stakeholders on numerous land use issues to enhance the economic and environmental sustainability of the Dutchess County region.

County Executive Molinaro said, “Taking part in the Pace Land Use Leadership Alliance Training Program restored my passion for public service and inspired me to work harder, to lead by example, and to mold consensus when confronting community challenges. Today, I remain as energized and passionate as I was when I graduated from LULA twenty years ago. The principles of Focus, Logic, Inclusion and Fairness guide the decisions of this administration as we seek to answer the important questions of 'who are we as a people and how do we hope to live?' I am grateful to Professor Nolon and all the staff at the Land Use Law Center who have provided me with the important foundation and I am humbled to accept the 2014 Groundbreaker’s Award.”

County Executive Molinaro began his career in public service when he was elected to public office at the age of 18 in 1994, serving on the Village of Tivoli Board of Trustees. In 1995, he became the youngest mayor in the United States. It was during this time he attended the Land Use Leadership Alliance Training Program. To date, he remains one of the youngest people to attend the training program.

Professor of Law John R. Nolon, founder of the Pace Law School’s Land Use Law Center, spoke about the impact County Executive Molinaro had on the program. “During the graduation ceremony, Marc told his fellow graduates that the program had changed his attitude about being mayor. When he came, he said he was nearly burned out from “putting out brush fires.” Because of the program, he was returning home refreshed because he understood that he had a different role: that of stimulating dialogue about problems and “building community one conversation at a time.” His words captured the spirit of the program and what we hope to achieve.

Since then, County Executive Molinaro’s graduation remarks “building communities one conversation at a time” have been etched on every LULA plaque and have been distributed to over 3,000 LULA graduates across 6 states. “Today, Marc Molinaro continues to govern by those words and it is a pleasure to honor him with the 2014 Groundbreaker Award,” said Professor Nolon.

For more information about the Pace Law Land Use Law Center, visit http://law.pace.edu/landuse.