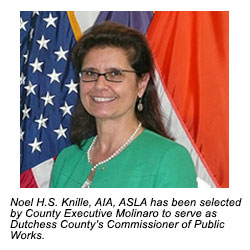 “The multi-year transformation of Dutchess County Government continues and the Department of Public Works is critical component in that evolution, as one of county government’s largest and most diverse departments. It is critical we have a Commissioner who can provide the leadership and expertise to ensure our Public Works services are delivered effectively and efficiently. After an extensive search, we have selected Noel Knille to lead the dedicated and talented individuals in our Public Works Department,” said County Executive Molinaro. “We are thrilled to have someone of Noel’s caliber join our team and take a leadership role in our continuing efforts to transform county government.”

Ms. Knille will return to Dutchess County from her current home in Washington, D.C. where she has most recently served as the Director of Facilities and Operations for the Washington International School where she has been responsible for the management of facilities and operations, including construction projects, for a two-campus private school and has been involved in the oversight and implementation of the first phase of a proposed 10 year, $30 million Master Plan for one of the campuses.

Ms. Knille is a graduate of Vassar College in Poughkeepsie where she earned her Bachelor of Arts degree in 1979 and was awarded the Maguire Fellowship. She completed a year of graduate studies in Biological Anthropology at Durham University in England and studied Landscape Architecture at the College of Environmental Science and Forestry at Syracuse University. She has continued her education throughout her career, completing Professional Development courses at the Graduate School of Design at Harvard University in 2001.    Ms. Knille also holds Master Degrees in Public Administration from the University of New Mexico and in Museum Studies from John Hopkins University.

Ms. Knille’s career has taken her from New York City to upstate New York, across the country to New Mexico and throughout the world, including Australia and Qatar. She began her career as Assistant Landscape Architect for the Central Park Conservancy in New York City. She then spent nearly two decades in upstate New York, working in various architectural positions, including Project Architect  and Facilities Planner for several organizations including the University of Rochester, Clark Patterson Mossien, University Partners Group and Greece Central School District.   From 2004-2007, she served as the Vice President for Facilities at New Mexico Military Institute.    She then worked as Director of Planning, Design and Construction at Charles Sturt University in Australia overseeing 5 primary campuses and several ancillary campuses.   She also worked in Doha, Qatar as the Director of Facilities and Procurement at the Virginia Commonwealth University Qatar before returning to the United States to her most recent position in Washington, D.C. Throughout the course of her career, she has been responsible for multi-million dollar budgets, staff management of hundreds of employees, new project construction, facility maintenance and renovation, procurement, master planning, project planning, security, and much more.    Ms. Knille is also a member of the American Institute of Architects and the American Society of Landscape Architects.

The Commissioner of Public Works reports directly to the County Executive and is responsible for planning and directing the operation of the Department of Public Works, which includes five divisions: Administration, Highway/Engineering, Parks, Building & Facilities and Airport.  Those five divisions encompass 395 miles of highways, 1.4 million square feet of county owned buildings, 6 County parks and the county government owned airport in the Town of Wappinger. The Commissioner directs a staff of more than 185 employees and oversees an annual operating budget of nearly $24 million.  Additionally, the Commissioner of Public Works is responsible for the oversight of the public works projects within $27 million Capital Improvement Plan, including the county’s $17 million annual highway and bridge improvement program. 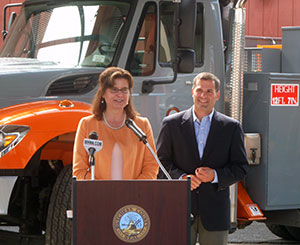 The reorganization of the Department of Public Works has been a key component in County Executive Molinaro’s multi-year transformation of Dutchess County Government. With the adoption of the 2013 county budget, Public Works began a multi-year process of transformation, targeted at reducing the size of the organization by nearly 15 percent over three years and reducing annual operating budget expenses as well as reducing capital expense. The overall goal is to streamline operations for efficiency and cost savings; develop public-private models for service delivery; and eliminate redundancy of services. County Executive Molinaro noted, “Noel has extensive experience in staff/departmental reorganization, implementation of cost saving opportunities and measuring customer satisfaction. As we continue the reorganization of Public Works, this is exactly the expertise we need to bring about successful outcomes for our employees and our residents.”

“I am honored County Executive Molinaro has selected me for this position and I look forward to taking on this new challenge,” said. “This is a wonderful opportunity to return to the Hudson Valley region and be of service to a county I know so well. I am eager to get started and work with the very talented team of professionals throughout Duchess County Government.”

Dutchess County Legislature’s Public Works and Capital Projects Committee Chairman Gerry Hutchings said, “Noel Knille, beyond her extensive credentials, also has a much needed asset that today’s DPW Commissioners require - the ability to represent  a department that interacts on a daily basis with our local communities and the residents that government serves. She provides a window of accountability for the people of Dutchess County on the County’s ability to serve the public.”

County Executive Molinaro has forwarded the resolution to confirm the appointment of Ms. Knille as Public Works Commissioner to the Dutchess County Legislature for approval at the September 9th board meeting.   Following confirmation by the Legislature, Ms. Knille will begin serving as Commissioner of September 23rd, 2013.