Poughkeepsie…Rail trail enthusiasts gathered this afternoon at the Hopewell Depot Trailhead in East Fishkill to celebrate the “official” Grand Opening of the completed Dutchess Rail Trail, the 13 mile multi-use linear Dutchess County park stretching from the Hopewell Depot in East Fishkill, through the towns of Wappinger, LaGrange and Poughkeepsie, reaching the Walkway Over the Hudson in the City of Poughkeepsie.   The Dutchess Rail Trail has been a significant undertaking, made possible by the work and dedication of many people.   Today’s ceremony recognized those who contributed to Dutchess Rail Trail, from idea conception to construction, with a special dedication honoring former Dutchess County Executive William R. Steinhaus. 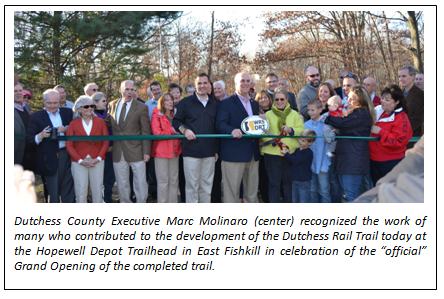 County Executive Molinaro unveiled a special dedication plaque noting the trail’s new, formal name as the “William R. Steinhaus Dutchess Rail Trail,” honoring Steinhaus for his legacy of public service and his work shepherding the Dutchess Rail Trail from an original idea through much of its construction.

As County Executive, Steinhaus was responsible for countless projects and initiatives that have made Dutchess County a better place to live, work and visit.   No project was closer to his heart however than the development of the Dutchess Rail Trail.  He envisioned a linear county park that connected communities and provided an opportunity to enjoy the beauty of Dutchess County.   He worked to bring federal, state and local partners together to make the Dutchess Rail Trail a reality. 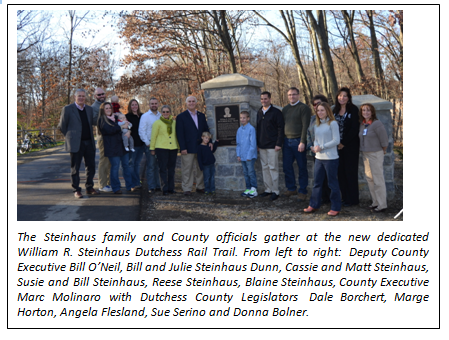 Former County Executive Steinhaus remarked, "It was an extraordinary honor to serve as County Executive for twenty years and to have the privilege to lead our skilled team of county staff to design and build the Harlem Valley Rail Trail and the Dutchess Rail Trail for the enjoyment of the many thousands of local county families who use the two rail trails every day."

The Dutchess Rail Trail (DRT) travels along the former Maybrook Rail Line.   Regular use of the rail line ended in 1974 following the fire that closed the Poughkeepsie Railroad Bridge.    Dutchess County purchased the Maybrook Line right-a-way from Hopewell Junction in East Fishkill to Morgan Lake in Poughkeepsie in 1984.    Early on, a highway project was considered but did not become a reality due to the environmental impacts of the development. The idea of creating a pedestrian/bike trail began to emerge.   In 2000, the Dutchess Rail Trail, as a 12 mile trail from Hopewell Junction to Morgan Lake in Poughkeepsie, was added to New York State’s Transportation Improvement Plan, making the project eligible for 80% federal funding.

Before the DRT project could begin, much need water infrastructure was installed through the rail line right of way.  In 2006, the Dutchess County Water and Wastewater Authority (DCWWA) completed construction on the 13 mile Central Dutchess Water Transmission Line (CDWTL) project, which has the capacity to carry up to 10 million gallons of water per day, providing water from the Joint Poughkeepsie Water Treatment Plant to communities in south central Dutchess County as well as the IBM East Fishkill site.    Work on the CDWTL cleared the entire right of way corridor, facilitating the development of the Dutchess Rail Trail.

Multiple public information workshop meetings were held in 2006 and 2007, one in each of the four towns in which the trail is located, to introduce people to the DRT and discuss key issues. The safety of road crossings, potential access to neighborhoods and other points of interest, and desired amenities for the trail were among the topics discussed with more than 500 residents who attended.  The ideas and feedback were incorporated into the final DRT design.

However, the construction of the DRT still presented complex engineering challenges, including significant culvert and bridge repair work, new bridge installations, environmental issues and more.  Due to these challenge, the trail was designed to be built in four phases. 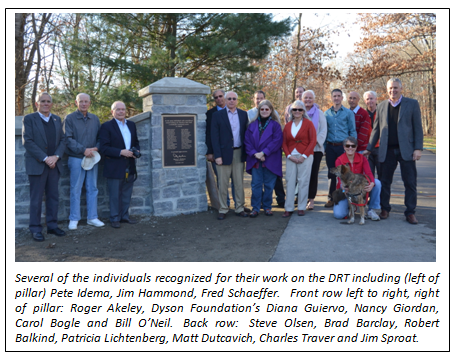 This fall, the final two phases were completed. Phase IV featured the most complex construction aspect of the DRT–construction of a new 743 foot long bridge extending over NYS Route 55’s six lanes of traffic, the Wappinger Creek and Old Manchester Road.   Phase V was also completed, with the .8 mile trail connection between Morgan Lake and the Walkway Over the Hudson.   With the completion of Phase IV and V, trail users can enjoy 13 continuous miles from Hopewell to Hudson, and then link via the Walkway Over the Hudson to the Hudson Valley Rail Trail in Ulster County, for more than 18 miles of trail in one direction!

Construction cost for complete Dutchess Rail Trail project is approximately $21 million, with much of the cost federally reimbursed.  The NYS Department of Transportation funded the entire cost of the bridge over NYS Route 55, estimated at approximately $3.5M.  The final connection to the Walkway Over the Hudson was fully funded by Dutchess County.  The remainder of project cost, approximately $15.5 million, received 80 percent reimbursement from the federal government, minimizing the net cost to the county taxpayers.

The Dutchess Rail Trail has been a popular destination since its first phase opened in East Fishkill, quickly earning accolades at the “Best Bike Trail” by the readers of Hudson Valley magazine.  With the full trail now complete and linked to the Walkway Over the Hudson, the acclaim for the “William R. Steinhaus Dutchess Rail Trail” is only expected to continue to grow.