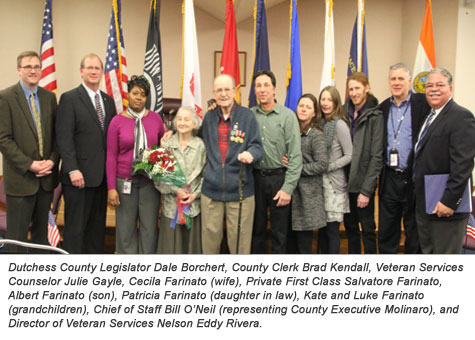 Dutchess County Executive Marcus J. Molinaro wrote in a letter (attached) to Mr. Farinato, “I offer my heartfelt and sincere appreciation to you, Salvatore Farinato, for your honorable service to our country.   We are the heirs of the world you and so many others fought for.   The generations that follow yours now must take their place in the brilliant history defended by heroes such as you, Mr. Farinato.” The County Executive was unable to attend the ceremony as originally scheduled due to a death in his family.

Director of the Dutchess County Division of Veteran Services Nelson Rivera and his staff helped Mr. Farinato’s son, Al Farinato, obtain the medals on behalf of his 90 year old father, who is a resident of Pleasant Valley. Mr. Farinato served as Utility Repairman during World War II and participated in the Battle of the Bulge.

“We are so proud of our father and so pleased to have him finally receive his medals and be recognized as the hero our family has always known him to be,” said Al Farinto. “Thank you to everyone at Dutchess County Veterans Services, particularly Nelson Rivera and Julie Gayle, for all of their help making today’s event so special.”

Dutchess County Legislator and Majority Leader Dale Borchert, who represents Mr. Farinto in District 3, presented Mr. Farinato with a plaque on behalf of County Executive Molinaro.   Legislator Borchert said, “It is truly a privilege to be able to honor Mr. Farinato for his service to our nation, joining him and his family as finally receives the medals he has honorably earned.   We thank Mr. Farinato for his service and his sacrifice protecting our country’s freedoms.”

Mr. Farinato was also presented with a proclamation from the Dutchess County Legislature in honor of his service.  United States Congressman Chris Gibson, who was represented by Patricia Hohmann, recognized Mr. Farinato’s service with a Certificate of Special Congressional Recognition and a United States flag that had flown over the United States Capitol.

County Clerk Kendall also presented Mr. Farinato with a newly issued F.A.V.O.R. card.    The "RETURN THE F.A.V.O.R. (Find and Assist Veteran Of Record)" discount program card entitles veterans to discounts at more than 120 retailers and service businesses throughout Dutchess County. F.A.V.O.R cards are available to veterans bring a copy of their Honorably Discharged Full-Time Active Duty Separation Papers (DD214, WD-AGO, Navpers 553, etc.) to the County Clerk’s Office and a picture ID showing Dutchess County as their county of residence.    The Division of Veterans Services can assist veterans in obtaining their Separation Papers.

“It is always such an honor to be able to say ‘THANK YOU’ personally to our veterans.   We are so pleased we could take part in recognizing Mr. Farinato for his honorable service to our country and help ensure he received his earned medals,” said Division of Veterans Services Director Nelson Eddy Rivera.

Assisting veterans and/or family members obtain earned medals is just one of the many services provided by the Dutchess County Division of Veterans Services.   In 2011, Veterans Services assisted nearly 11,000 veterans or family members and provided over 13,000 services to the veteran community, including assisting 63 veterans obtain medals.   Services also include assistance in filing claims and referrals for health benefits, life insurance, educational benefits, survivor’s benefits, real property tax exemption applications and much more.