Dutchess County Executive Marcus J. Molinaro reminds residents that today is “World Autism Awareness Day.”     In 2007, the United Nation adopted a resolution perpetually designating April 2nd as World Autism Awareness Day to bring the world's attention to autism, a pervasive disorder that affects tens of millions.    According to the Centers for Disease Control and Prevention, one in every 88 U.S. children has autism.  The goal is to help to increase and develop world knowledge of autism epidemic and impart information regarding the importance of early diagnosis and early intervention.     World Autism Awareness Day also celebrates the unique talents and skills of persons with autism. 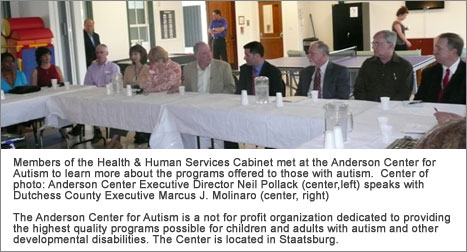 “World Autism Awareness Day has special significance for me as the father of a young girl on the Autism Spectrum,” said County Executive Molinaro. “Autism is now recognized as the fastest growing disability in America today and is important for all members of our community to recognize the struggles of those who live with Autism and their families.”