Poughkeepsie… Dutchess County Executive Marcus J. Molinaro joined the Dutchess County Chapter of Remove Intoxicated Drivers (RID) today for the 36th annual “DWI Victims Memorial Ceremony” to honor the memories of Dutchess County victims of DWI crashes. Friends and family gathered as 52 victims’ names were read. The goal of the event is to heighten public awareness of alcohol-related fatalities and the impact of impaired driving on the community. A short video from today’s event is available online. 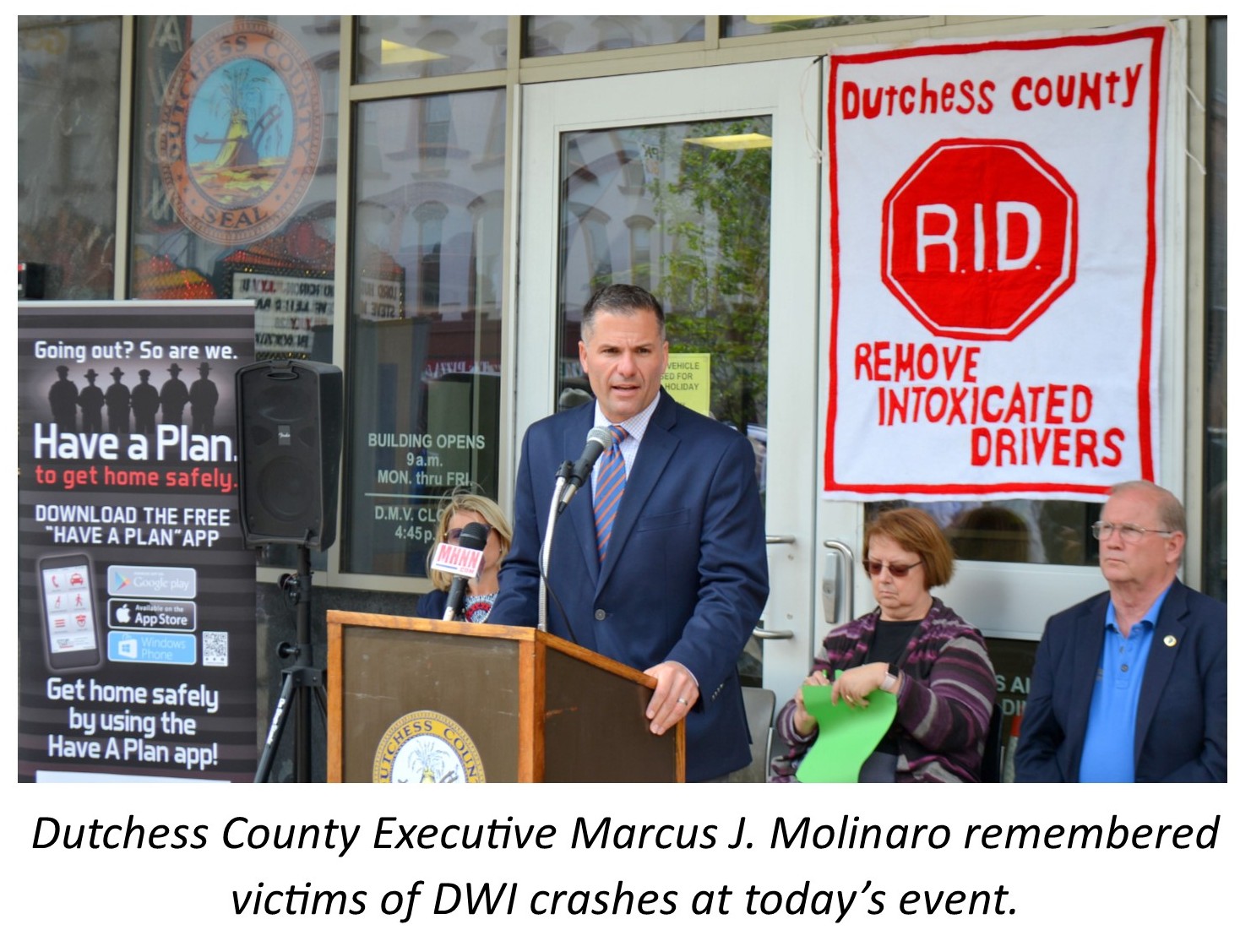 The annual ceremony includes a reading of Dutchess County victims of DWI.  Fifty-two (52) victims are memorialized on a plaque that hangs in the Dutchess County Office Building outside of the Motor Vehicles Office.

County Executive Molinaro and local officials also announced law-enforcement agencies throughout Dutchess County will participate in a special enforcement effort to crack down on impaired driving to coincide with the Memorial Day holiday. The statewide STOP-DWI crackdown efforts start on Friday, May 24th and will end on Tuesday, May 28th.

Memorial Day week is often considered the unofficial start of summer, historically a deadly period for impaired driving.    With more people on the road in general and more people specifically driving impaired, there is approximately 13 percent more fatalities than on a non-holiday weekend. The American Automobile Association (AAA) projected last year 36.1 million drivers would drive at least 50 miles from home during Memorial Day weekend. According to data from the National Highway Traffic Safety Administration (NHTSA), about 400 people a year die nationwide during a typical Memorial Day weekend.    Forty-four (44) percent of all traffic fatalities that occur over the Memorial Day weekend are alcohol-related,  therefore it is critical for all drivers and passengers to be mindful and responsible throughout these high-risk holiday periods.

The New York State Police, Dutchess County Sheriff’s Office and municipal law-enforcement agencies will collaborate across the state and will be out in force during this coordinated effort to reduce the number of alcohol-related injuries and deaths during this period.

Dutchess County District Attorney William V. Grady said, “For every victim, there are friends and relatives, so literally thousands of people have experienced the emotional trauma and the heartache that goes with experiencing a death as a result of a driving while intoxicated case – especially when the irresponsible conduct by the offenders who caused these terrible tragedies could have easily been avoided.”

County Executive Molinaro said, “We’re proud of the many recreational opportunities Dutchess County has to offer year-round, and we look to ensure our roadways are safe for all who use them. Driving while intoxicated puts lives at risk, and Dutchess County will not tolerate it on our roads. We thank the brave men and women who keep our streets safe from unsafe drivers, and we applaud their dedication to their duty to safeguard our residents. Memorial Day is an opportunity to celebrate with friends and family, but if you do, please celebrate safely, designate a driver and don’t risk your lives and the lives of others.”

The Memorial Day Weekend crackdown is one of many statewide enforcement initiatives promoted by the New York State STOP-DWI Association, with additional funding from the STOP-DWI Foundation with a grant from the Governor’s Traffic Safety Committee. The Statewide STOP-DWI Crackdown Campaign also targets July 4th and Labor Day weekend, Halloween and the holiday season in December.

While STOP-DWI efforts across New York have led to significant reductions in the numbers of alcohol and drug related fatalities, still too many lives are being lost because of crashes caused by drunk or impaired drivers. Highly visible, highly publicized efforts like the STOP-DWI Crackdown Campaign aim to further reduce the incidence of drunk and impaired driving.