Poughkeepsie ... Dutchess County Executive Marcus J. Molinaro has announced Adam Roche will be appointed to serve as the Director for the Division of Veterans Services as current Director Marc Coviello steps down as he moves out of the area.      Mr. Roche will begin as Director on August 17th, 2020. 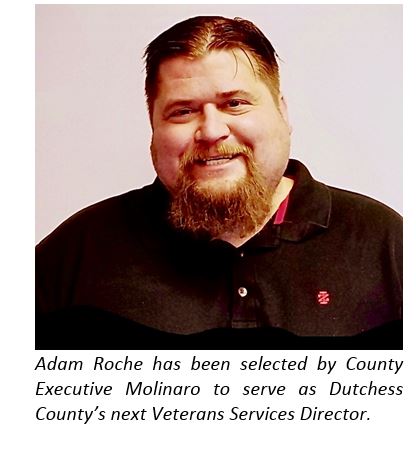 County Executive Marc Molinaro said, “First defending our nation in Iraq and Afghanistan and now advocating for his fellow veterans here in Dutchess County, Adam Roche has always put the interest of his neighbors ahead of his own. It’s that selflessness that will serve him well as Director of the County’s Division of Veterans’ Services, as his dedication to our former service members and his willingness to work with our community leaders will intersect to the benefit of so many brave men and women who, like himself, valiantly safeguarded our freedom. I’m confident Adam’s leadership will propel the Division of Veterans’ Services to new heights, advocating for local veterans and providing them the support they so rightly deserve.”

Mr. Roche is a United States Marine Corps Veteran, who enlisted in 2000 following his graduation from Our Lady of Lourdes High School in Poughkeepsie.   He was deployed in 2003 to Iraq, where he served as a Machine Gun Infantry Squad Leader. After Iraq, Mr. Roche’s company was deployed to Afghanistan, where he served as the Sergeant of the Guard for the American Embassy in Kabul. He finished his active service in the Marine Corps in August 2004.

Following his honorable service, Mr. Roche worked locally in the restaurant and tourism industry for several years and was active in the local veteran community. In 2016, he began working at Mental Health America of Dutchess County, leading the PFC Joseph Dwyer PTSD Veterans Support Program, known as Vet2Vet, which was established with state funding secured by NYS Senator Sue Serino for Dutchess County Government.   The program,  named for PFC Joseph Dwyer, a dedicated U.S. Army soldier, who passed away as a result of complications from Post-Traumatic Stress Disorder (PTSD) and subsequent substance abuse and depression, brings veterans together in a safe, anonymous environment where they can work jointly to help each other manage the effects of PTSD and Traumatic Brain Injury (TBI).  Under Mr. Roche’s leadership, this program has served local veterans by providing advocacy, housing, and mental health services to local veterans and has become a trusted resource.

“I am excited to take on this new opportunity and further expand efforts to serve our local veterans.   Through my work with Vet2Vet program, I have closely collaborated with the great team at Dutchess County Veterans Services and have a great deal of respect and admiration for their dedication and passion.  I am truly humbled County Executive Molinaro has provided me this opportunity to do even more for our local veterans,” said Mr. Roche.

He continued, “It is truly the greatest honor to serve those who have served our nation, often at great personal sacrifice.   Veterans face unique challenges and we must be here for them as they have been there for all of us.”

Mr. Roche succeeds Marc Coviello who has served as Veterans Services Director since May 2018.    Under the Mr. Coviello’s leadership, the Division of Veterans Services expanded its outreach to veterans and coordinated several significant events, including the Year of the Veteran parade held in September 2019 and the Memorial Day drive-by convoy held this year when traditional events and memorial services could not be held due to the COVID-19 pandemic.     Mr. Coviello also facilitated the establishment of the Tom Zurhellen Fund, which County Executive Molinaro created as part of the 2020 County Budget.    The fund provides assistance to veterans in danger of becoming homeless, or experiencing health and welfare issues due to loss of employment or unfortunate circumstance.

Mr. Coviello is moving out of the area and will pursue other opportunities.   County Executive Molinaro said, “We wish Marc the very best as he moves on to his next endeavors. I am tremendously grateful to him for his service to this country, leadership in our county and passion for serving his fellow veterans. Thank you for your friendship, partnership and terrific work.”

“Adam Roche will carry on the tradition of service, advocacy and dedication that  Dutchess County Veterans Services is known for and we look forward to continued excellence, ” concluded Molinaro.

County Executive Molinaro will forward a resolution confirming Mr. Roche’s temporary appointment as Veterans Service Director to be considered at the Dutchess County Legislature board meeting in August.