Poughkeepsie … As Dutchess County joins the nation throughout February in celebrating the contributions of Black Americans during Black History Month, Executive Marc Molinaro announced today the County’s Division of History is sponsoring a free virtual event presented by the Dutchess County Historical Society (DCHS) on Wednesday, Feb. 9th at 7 p.m., which will examine the transient Free Black Community that emerged in Hyde Park just prior to the Civil War. 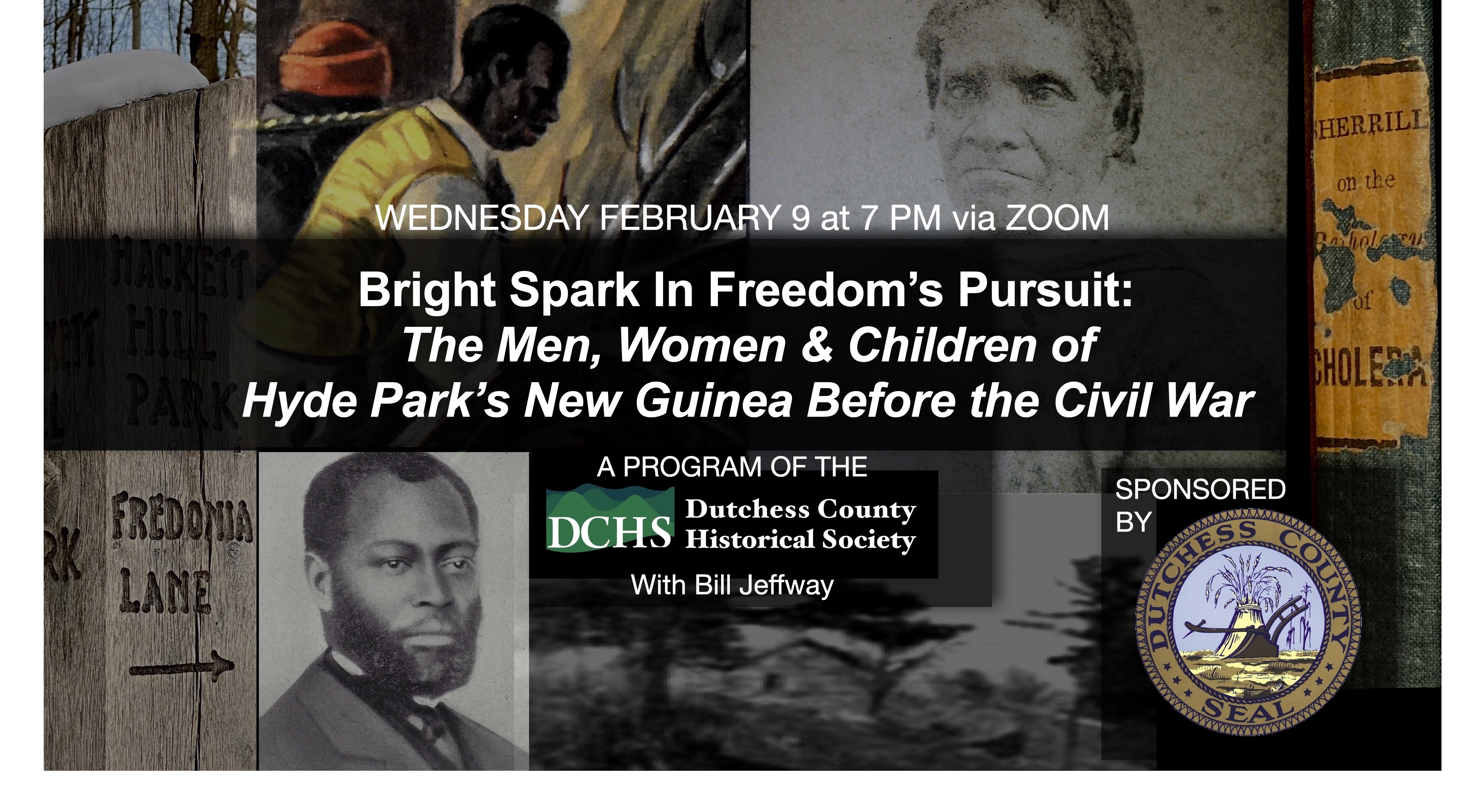 Led by DCHS Executive Director Bill Jeffway, Bright Spark in Freedom’s Pursuit: The Men, Women & Children of Hyde Park’s New Guinea Before the Civil War will present the results of 30 years of study of the New Guinea settlement, used as a general catchall reference to anyone from Africa – not in a specific reference to the West African country of that name. Registration for this free event is available at bit.ly/Bright-Spark, and registrants will receive a Zoom link to join the event.

County Executive Molinaro said, “African-Americans have been part of the Dutchess County story from before our founding, dating back to the early 1700s, and our County is proud to shine a spotlight on their ongoing accomplishments to this day. This online educational experience will highlight both the struggles and triumphs of African-Americans in Dutchess County, as well as the historic role our community has played in their strides for freedom and equality. I urge all residents to learn about the importance of Dutchess County in the Black American experience and register for this enlightening online presentation.”

Dutchess County’s first census, held in April 1714, recorded 30 enslaved individuals. The institution of slavery would continue to loom large in the county and throughout New York until the formal end of slavery in 1827. Due to loopholes in the gradual emancipation law of 1799, some individuals would continue to experience restrictions on their legal freedoms for years afterward. Nevertheless, communities of free and enslaved African-Americans emerged throughout Dutchess during this period, making vital contributions to the settlement and expansion of the county. The New Guinea settlement in Hyde Park is a prime example.

County Historian William P. Tatum III said, “Slavery is a part of the story; through research and programming, we seek to better understand how Black residents succeeded despite the obstacles in their paths.”

In addition to sponsoring the upcoming virtual event, Dutchess County Government continues to celebrated Black History Month by emphasizing the impact African-Americans have played in the County’s development.

For more than a century, historians of Dutchess County have worked to document, share and understand Black History and the nuances it brings to local history. The Dutchess County Historical Society has taken a leading role in these endeavors, from publishing scholarly articles in its annual journal, The Dutchess County Historical Society Yearbook, to hosting a special committee on Black History that operated throughout the 1990s. Celebrating the African Spirit (CAS), a Poughkeepsie-based organization, continues the earlier committee’s work today. In August 2021, CAS hosted a groundbreaking event on College Hill in Poughkeepsie, commemorating Frederick Douglass’s 1858 speech on the same site.

African-Americans have contributed greatly to Dutchess County over the past 300-plus years, including, among others:

•    Harry, an enslaved individual residing in Rhinebeck in 1751, who resisted his enslavers, as chronicled in Dutchess County Ancient Document 3320, available at www.dutchessny.gov/ancientdocuments;

•    Jacob Lyle, who served in the Continental Army during the Revolutionary War, later settling in Milan;

•    John Bolding, a freedom seeker from South Carolina, who established a business in Poughkeepsie and was rescued from slave hunters by Poughkeepsie residents in 1851;

•    Poughkeepsie resident Gaius Bolin, the first Black graduate of Williams College in 1889, the first African-American to pass the New York State bar examination in 1892 and president of the Dutchess County Bar Association in 1945;