Poughkeepsie … In anticipation of Safe Stop Education Enforcement Day on Thursday, April 28th, Dutchess County Marc Molinaro announced today Ronald Andriello, of Mat Bus Corp./Total Transportation which contracts with the County, has been named the winner of the 19th Dutchess County School Bus Driver of the Year Award, recognizing his exemplary service and safety record transporting Wappingers Central School District (WCSD) students to and from Abilities First in Wappinger. The award, part of the Dutchess County Traffic Safety Board’s efforts to promote school bus safety, is given in conjunction with the launch of the annual Operation Safe Stop Project supported by the Governor’s Traffic Safety Committee. Today’s program also highlighted the County’s school bus camera program, which continues to expand school district participation with more than 600 cameras installed throughout the County, and nearly 1,400 citations issued.

The County Executive also announced the two largest school districts in Dutchess County – the Arlington Central School District (ACSD) and the Wappingers Central School District (WCSD) – have joined the County’s school bus safety program, a partnership with Bus Patrol, which makes available to more than 1,000 school buses across Dutchess County access to advanced safety technology, including stop-arm cameras, to help enforce traffic laws and educate motorists on the dangers of passing school buses, all at zero cost to local taxpayers. County Executive Molinaro made both announcements at Abilities First in Wappinger. 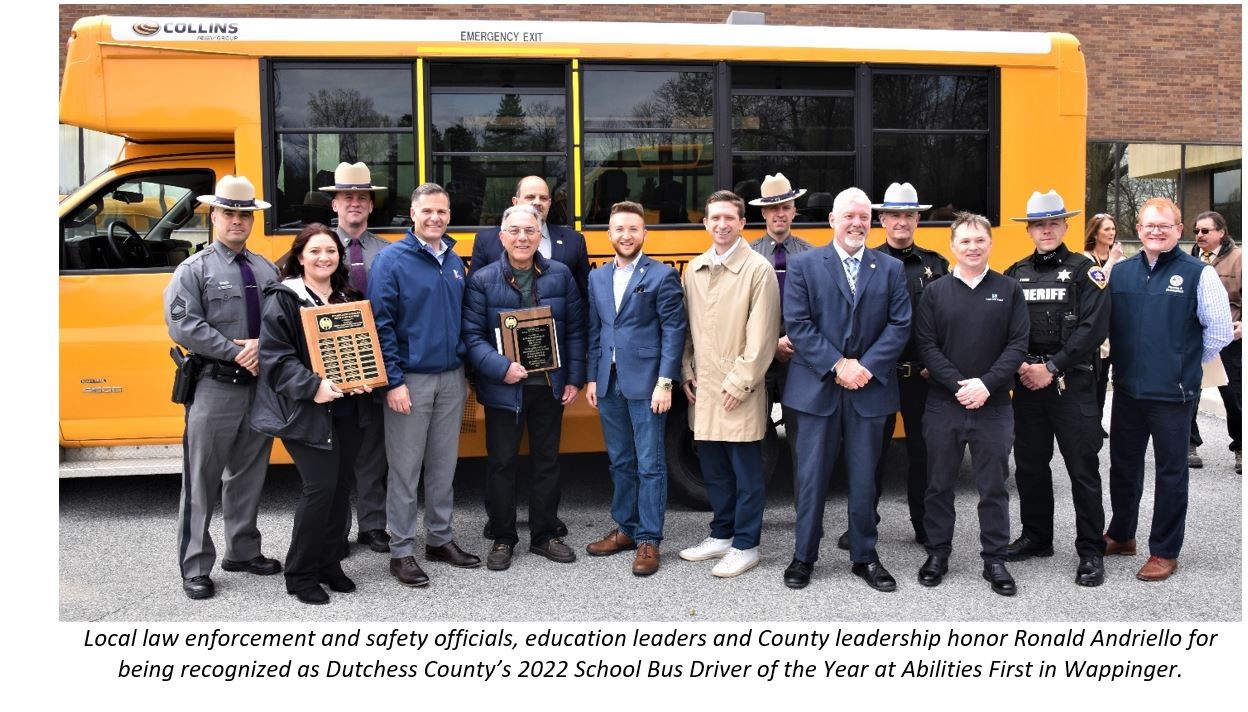 On Operation Safe Stop Education Enforcement Day, County, state and local law enforcement agencies will shadow school buses to identify and ticket drivers who do not obey the flashing red lights on a stopped school bus. Law enforcement throughout Dutchess County will target enforcement efforts at what school transportation officials have identified as “hot spots,” where most violations typically occur. 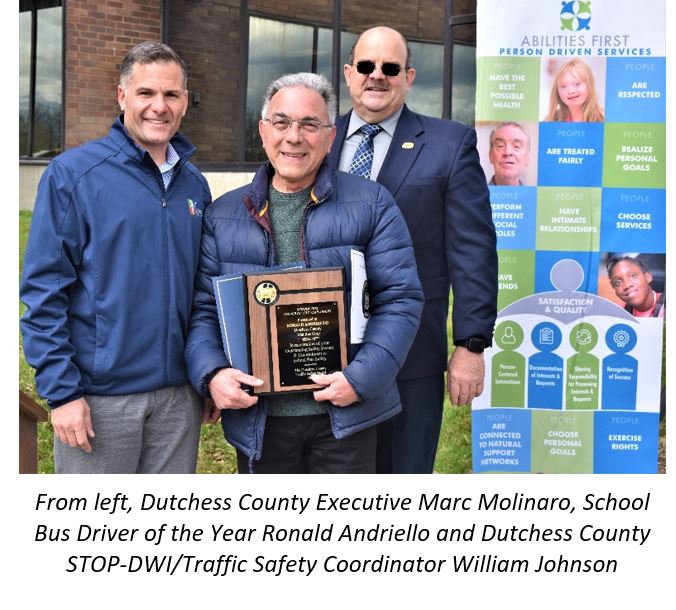 County Executive Molinaro said, “Whether on busy roadways that span several lanes in each direction or on smaller rural roads, school bus drivers each day have the great responsibility of transporting the students in their care to and from school. Regardless of the traffic or weather conditions they face, these drivers take great pride and care in their duty, and Ronald Andriello personifies the professionalism and conscientiousness the job demands. We thank Mr. Andriello for his devotion to safeguarding his students’ safety, and we remind motorists they play a crucial role in ensuring students arrive at their destinations safely: Please do not pass a school bus with its red lights flashing – it’s dangerous and it’s against the law.”

Mr. Andriello, a Mat Bus Corp./Total Transportation employee for the past six years following 38 years working for the U.S. Postal Service, was presented this morning with a commemorative plaque and honored as the School Bus Driver of the Year at the Operation Safe Stop kickoff press conference. Total Bus Corp. contracts with the WCSD for additional bus transportation.

The Dutchess County Traffic Safety Board’s School Bus Driver of the Year award seeks to promote school bus safety through education and enforcement efforts. School bus drivers are an integral part of the safe transportation of school children, and crashes and related injuries are prevented by these highly trained professionals’ experience, skill and daily performance.

The annual award was initiated in 2002 to increase public awareness regarding school bus safety issues and to recognize school bus drivers who get children to and from school safely on a daily basis; due to the COVID-19 pandemic, no award was given out in 2020 and 2021.

School Bus Safety Program
Established in December 2021, the County’s partnership with Bus Patrol provides local districts with this potentially life-saving technology, which can protect thousands of students throughout Dutchess County by deterring motorists who might pass a stopped bus with its flashing red lights. 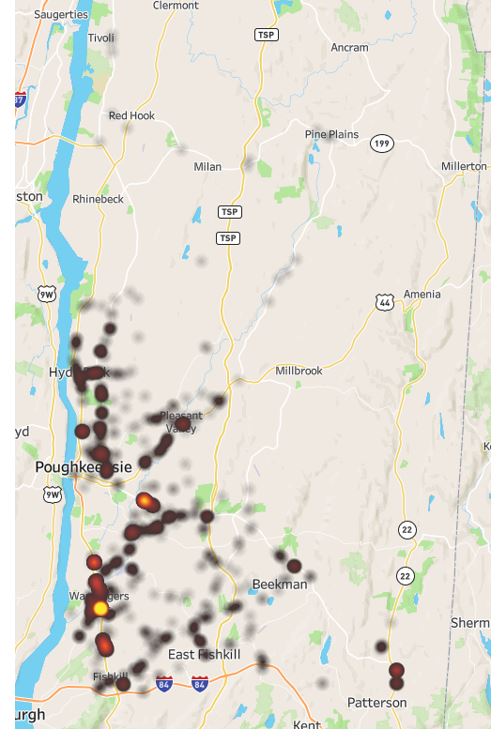 When a local district opts into the program and the on-board cameras are installed, an initial, month-long warning period goes into effect; motorists who illegally pass a stopped school bus equipped with the cameras will receive a warning in the mail. When that warning period expires, violators who pass a stopped school bus will receive a citation and fine in the mail.

Six local school districts, as well as Dutchess BOCES, have opted into the County’s partnership with Bus Patrol since its inception in late 2021, with the Pine Plains Central School District being the first in December 2021.  Other participating districts include:

To date, 676 school buses have had the equipment installed on them, resulting in almost 1,400 citations (warnings and violations) being issued. The attached heat map shows the locations; the darker the coloring, the more occurrences. The greatest occurrences of violations have taken place on Routes 9 and 9G in Hyde Park and Routes 44 and 55 in LaGrange.

Dr. Dwight Bonk, WCSD Superintendent of Schools, said, “We appreciate Dutchess County making this invaluable program available to our district and the others throughout the county. Student safety is our district’s top priority, and joining this collaborative effort will undoubtedly lead to safer rides to and from school for many WCSD students.”

New York State Vehicle and Traffic law requires drivers to stop from either direction, even on a divided highway, any time a school bus’s red lights are flashing. Passing a school bus with red lights is not only dangerous, but it is illegal and punishable with fines ranging from $250 to $1,000; a motorist may also be assessed five points on his driver’s license, and penalties can include possible imprisonment (up to 30 days for first offense and 180 days for a third or subsequent conviction). 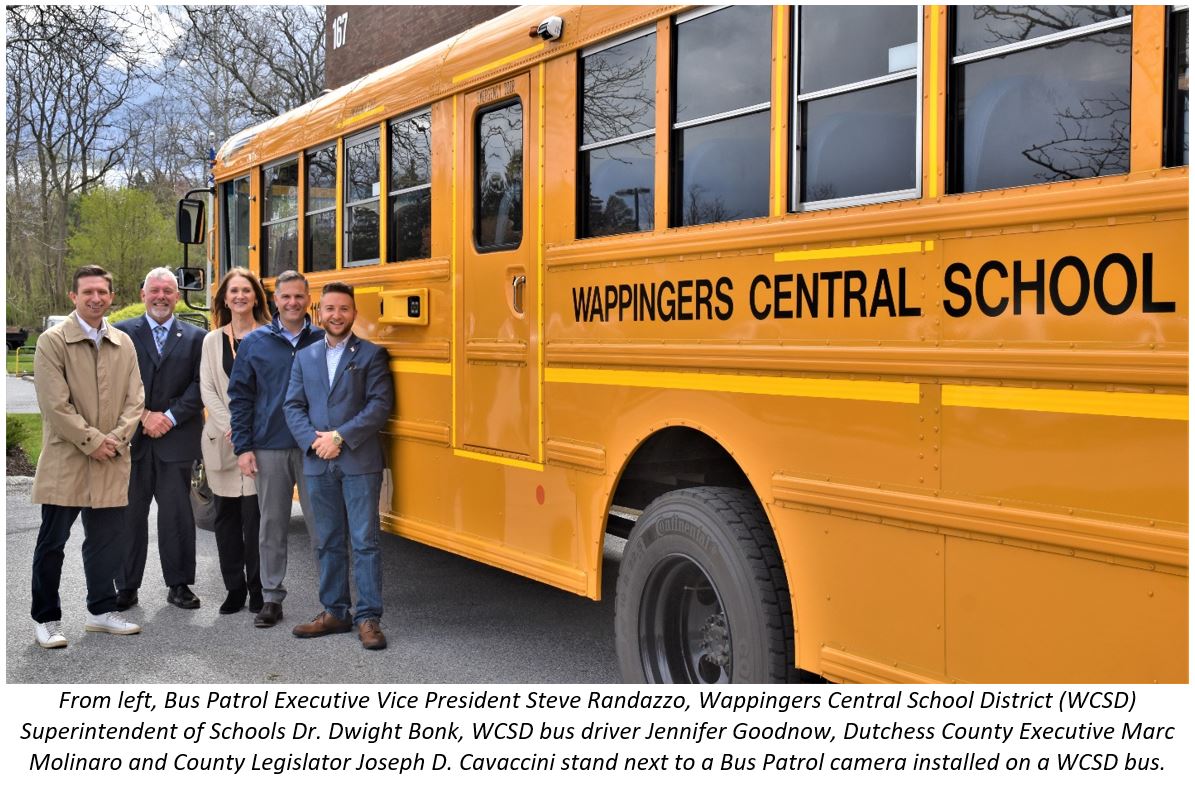 Bus Patrol Executive Vice President Steve Randazzo said, “Our partnership with Dutchess County has already proved its effectiveness in protecting students by alerting motorists who pass a stopped school bus to the danger they present. We’re grateful to Dutchess County for its collaboration in this life-saving initiative, and we look forward to having more local districts join us in this safety partnership.”

According to the Governor’s Traffic Safety Committee, an estimated 50,000 motorists illegally pass stopped school buses every day in New York State, putting the lives and safety of children at risk.

Dr. David Moyer, ACSD Superintendent of Schools, said, “We are pleased to partner with the County to help improve bus safety for children throughout the region.”

Additional information about the School Bus Safety Program is available on the County’s website: https://www.dutchessny.gov/Departments/Traffic-Safety/school-bus-safety.htm.