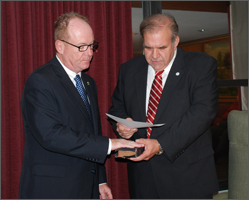 Robert G. Rolison, Chairman of the Dutchess County Legislature, was sworn in to Dutchess Community College's Board of Trustees.  Rolison, a legislator elected in 2003 to represent areas in the Town and City of Poughkeepsie and appointed Chairman in 2010, was recommended and confirmed by the Legislature at its Board Meeting convened on September 10.

The Legislature, which appoints five members to the 11-member college board, one of whom may be a member of such local Legislative body.  Rolison, joins an prestigious group of former Legislature Chairmen chosen to serve on the Board by his peers including Douglas A. McHoul and Bradford H. Kendall.  He replaces former Legislator David Patrick Kelly.

Rolison stated, "I am truly honored to serve as a member of the Board of Trustees to Dutchess Community College. The college has continually been recognized for its academic excellence and outstanding student-success rates.  I attribute its successes to the work of the Board of Trustees, faculty, and staff.  I look forward to working with the board to continue its great work."

Rolison is a life long resident of Poughkeepsie where he lives with wife, Lori and son, Christopher. In addition to Rolison’s appointment, legislators reappointed Betsy Seaman-Brown, of Poughkeepsie, to the Board of Trustees.  The term expires on June 30, 2019.