The Dutchess County Sheriff’s Office reports the arrest of Quanisha S. Lyons, age 26 of Poughkeepsie, for endangering the welfare of a child on 4/24/15 at approximately 9 pm.

On the above date and time, Ms. Lyons came to the Dutchess County Jail to attempt to bail out her brother and while she was inside the jail, an infant was observed in her vehicle. Ms. Lyons was conducting business inside the jail for approximately 40 minutes and is accused of leaving her infant daughter alone in the running vehicle for that entire time. After coming out of the jail, Ms. Lyons was arrested by waiting Deputies.

At this time, Ms. Lyons has been charged with Endangering the Welfare of a Child (Misdemeanor) and was released on an appearance ticket after being processed. CPS was notified and assisted in the investigation. More information may be released as it becomes available.

As with any criminal case, the charges described above are merely accusations and Ms. Lyons is presumed innocent until proven guilty in a court of law. 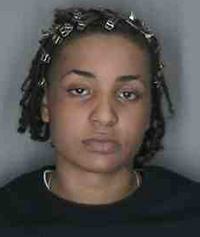