One man arrested, one sought in bank fraud case

The Dutchess County Sheriff’s Office Detective Bureau reports the arrest of Khiry Hines-Peppers, age 24 of Beacon, in connection with a stolen/fraudulent checks investigation throughout the southern Dutchess area.

In addition to the arrest of Mr. Hines-Peppers, the Sheriff’s Office also holds an arrest warrant for Brandon Soto (age 17 of Poughkeepsie) in connection with the same investigation. Mr. Soto is currently in the custody of the New York City Department of Corrections on unrelated charges.

Beginning in early December 2014, an investigation was conducted into stolen checks being deposited at numerous branches in the Town of Poughkeepsie, City of Poughkeepsie, Village of Wappingers Falls, Town of Fishkill and City of Beacon. The stolen checks would be deposited into an account and money would then be withdrawn from the account using an ATM. A total of approximately $15,000 was stolen using this method.

Mr. Hines-Peppers has been charged with 17 counts of criminal possession of a forged instrument 2nd degree (Class D Felony), and the arrest warrant for Mr. Soto is for 1 count the same charge.

Mr. Hines-Peppers was arrested on 2/4/15 and after being processed, was arraigned in the City of Beacon Court and remanded to the Dutchess County Jail in lieu of $5,000 cash bail or $10,000 bond. The investigation is ongoing and more charges are possible, and because of this, the name of the financial institution will not be released at this time. The Sheriff’s Office was assisted in the investigation by the City of Beacon Police Department.

As with any criminal case, the charges described are merely accusations and the defendants are presumed innocent until proven guilty in a court of law. 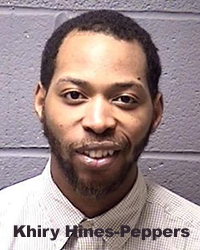 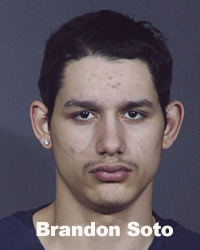