The Dutchess County Sheriff’s Office reports locating the vehicle believed to have been used in the fatal hit-and-run crash on 3/19/15 which killed Concetta Eastman of Copake NY. The vehicle was located this past weekend, and at this time the bulletin for it has been cancelled. It is no longer necessary for members of the public to report possible information on the vehicle.

The vehicle was located through the aggressive investigative efforts of the Sheriff’s Office Detective Bureau and Crash Investigation Unit, combined with tips from the public. The Sheriff’s Office would like to thank everyone who took the time to report possible information on this vehicle.

The Dutchess County Sheriff’s Office reports the investigation into a fatal auto-pedestrian crash on Bog Hollow Road in the Town of Amenia (Hamlet of Wassaic) at approximately 8 pm on 3/19/15.

Sheriff’s Deputies responded to Bog Hollow Road near the Connecticut border for a report of a car/pedestrian accident and upon arrival, observed the pedestrian to be seriously injured with apparent life-threatening injuries.

The pedestrian, later identified as Concetta Eastman (age 36 of Copake NY), was transported by ambulance to Sharon Hospital in Connecticut where she later died. Preliminary investigation has shown that Ms. Eastman was in the process of getting into her vehicle, which was parked on the edge of Bog Hollow Road, when a southbound vehicle struck her and left the scene.

The Sheriff’s Office Detective Division and Crash Investigation Unit are aggressively working to identify the driver responsible for striking Ms. Eastman and then leaving the scene.

Evidence at the scene and witness statements suggest that the offending vehicle may be a dark colored 2003—2006 Dodge pickup truck, 1500 or 2500 Series, with damage to the front passenger side. The vehicle was last seen traveling southbound on Bog Hollow Road near the Connecticut State border. Currently, there is no information about the driver.

Anyone who may have seen this type of vehicle in that area or may have information on the vehicle or driver is urged to contact the Sheriff’s Office as soon as possible.

All calls and tips will be kept confidential. The investigation is continuing and more information may be released as it becomes available.

Below is a photo of a similar vehicle to the one that left the scene. Anyone who may have seen this type of vehicle with front end damage is urged to contact the Sheriff’s Office as soon as possible. 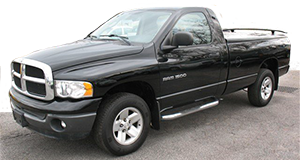