The Dutchess County Sheriff’s Office reports the arrest of Jeremy Holmes, age 33 of Union Vale, in connection with a domestic dispute which occurred at approximately 12:30 a.m. on January 8, 2015

At the above date and time, Sheriff’s Deputies responded to 1699 East Noxon Road in Union Vale for a report of a father/son domestic dispute and possible Order of Protection violation.

Upon arrival Mr. Holmes initially fled into the woods, however, returned to the scene a short while later. Upon returning to the scene Mr. Holmes ran into a bedroom and refused to come out, and also present in the bedroom was a vicious pitbull.

Several attempts were made to get Mr. Holmes to come out, however, he would not and the dog would not allow Deputies into the room. Finally, the dog was subdued and Mr. Holmes was taken into custody, but not before he resisted arrest. During the investigation, it was discovered that there is a full-stay away Order of Protection in effect for Mr. Holmes, meaning that it’s unlawful for him to be present at 1699 East Noxon Road.

No one was injured during the incident, and at this time Mr. Holmes has been charged with the following:

After being processed, Mr. Holmes was arraigned before the Town of Union Vale Court and was remanded to the Dutchess County Jail in lieu of $20,000 cash bail or $40,000 bond.

As with any criminal case, the charges described above are merely accusations and Mr. Holmes is presumed innocent until proven guilty in a court of law. 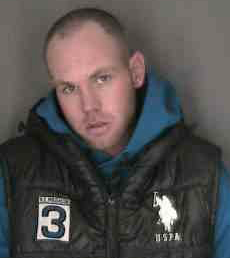