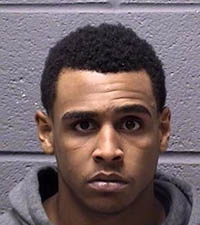 The Dutchess County Sheriff’s Office reports the arrest of Deonjae Thacker, age 19 of Ohio, for rape in connection with an incident that occurred in the Town of Hyde Park in late November 2015.

Mr. Thacker was arrested on 1/7/16 as the result of an investigation by the Sheriff’s Office Detective Bureau. At this time he has been charged with Rape in the 3rd Degree, a felony, and is accused of sexually assaulting the victim during a house party in the Town of Hyde Park. Mr. Thacker and the victim are known to each other, and no further information will be released at this time due to the sensitive nature of the incident.

After being processed Mr. Thacker was arraigned before the Town of Hyde Park Court, and was remanded to the Dutchess County Jail in lieu of $5,000 cash bail or $10,000 bond. As with any criminal case, the charges are merely accusations and Mr. Thacker is presumed innocent until proven guilty in a court of law.