The Dutchess County Sheriff’s Office reports the arrest of two subjects for felony level DWI and other charges resulting from two (2) separate traffic stops during the evening of 5/2/16.

On 5/2/16 at approximately 4:45 pm a vehicle was observed by a motorist to be traveling erratically, at which time the motorist contacted the Sheriff’s Office and Deputies stopped the vehicle on Burnett Blvd in the Town of Poughkeepsie. The operator was identified as Jaison D. Cook (age 38 of Pleasant Valley), and after further interview and investigation he was taken into custody for DWI. During processing it was discovered that Mr. Cook has a previous DWI conviction within the last 10 years (3/20/10), which elevates the current DWI charge to a felony. Additionally Mr. Cook was found to allegedly be in possession of a dagger and concentrated marihuana, and has been charged in connection with them as well. At this time Mr. Cook has been charged with felony DWI, Criminal Possession of a Controlled Substance 7th Degree (Misd.), and Criminal Possession of a Weapon 4th Degree (Misd.) After being processed Mr. Cook was released on an appearance ticket and is due to appear before the Town of Poughkeepsie Court on 6/6/16.

On 5/2/16 at approximately 7:45 pm a Deputy on patrol observed a vehicle traveling erratically and failing to keep right on Old Hopewell Rd in the Town of East Fishkill. The vehicle was stopped and the operator identified as Benjamin M. Murello (age 43 of Wappinger), and after further interview and investigation Mr. Murello was taken into custody for DWI. During processing it was discovered that Mr. Murello’s license was suspended and that he has a previous DWI conviction within the last 10 years. At this time Mr. Murello has been charged with felony DWI, Aggravated Unlicensed Operation 1st Degree (felony), failing to keep right (traffic infraction), and refusing to submit to a breath test (traffic infraction). After being processed Mr. Murello was released after posting $750 bail, and is due to appear before the Town of East Fishkill Court at a later date.

As with other criminal cases, the charges described above are merely accusations and both Mr. Cook and Mr. Murello are presumed innocent until proven guilty in a court of law. 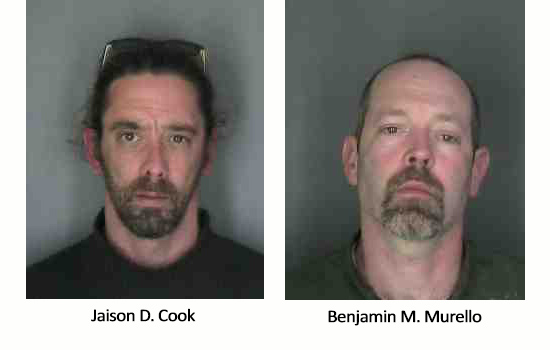