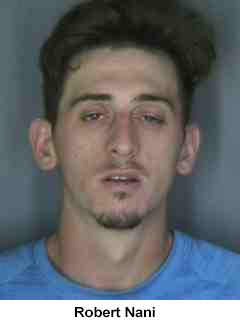 The Dutchess County Sheriff’s Office reports the arrest of Robert Nani, age 26 of LaGrange, at approximately 5 pm on 8/13/16 for driving while impaired by drugs.

While investigating a suspicious vehicle complaint in the LaGrange area, Deputies observed a vehicle being operated in an erratic manner on Theandra Lane. The vehicle was stopped and the operator was identified as Mr. Nani, and after further interview and investigation he was taken into custody at the scene for impaired driving. At this time Mr. Nani has been charged with the following:

After being processed Mr. Nani was arraigned before the Town of LaGrange Court, and was remanded to the Dutchess County Jail in lieu of $10,000 cash bail or $20,000 bond.

As with any criminal case, the charges described above are merely accusations and Mr. Nani is presumed innocent until proven guilty in a court of law.