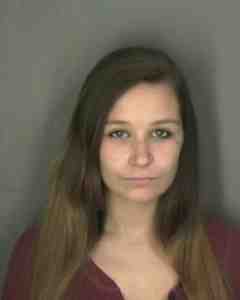 The Dutchess County Sheriff’s Office reports the arrest of Alexa E. Michalko, age 19 of Lake Peekskill NY, for promoting prison contraband and endangering the welfare of a child in connection with an incident at the Dutchess County Jail on 1/7/16.

On 1/7/16 at approximately 3:15 pm Sheriff’s Deputies responded to the jail for a report of contraband that was found by a Corrections Officer. Further investigation revealed that Ms. Michalko was a visitor at the jail and allegedly attempted to pass 1 dosage unit of suboxone, a controlled substance, to inmate James Heaphy. Ms. Michalko is further accused of using the exchange of her 8-month-old daughter between her and Heaphy to conceal the passage of the suboxone to him.

At this time Ms. Michalko has been charged with Promoting Prison Contraband 2nd Degree and Endangering the Welfare of a Child, both of which are misdemeanors. After being processed she was released on an appearance ticket, returnable to the City of Poughkeepsie Court at a later date. In addition CPS was contacted and is involved in the investigation.

As with any criminal case, the charges described above are merely accusations and Ms. Michalko is presumed innocent until proven guilty in a court of law.