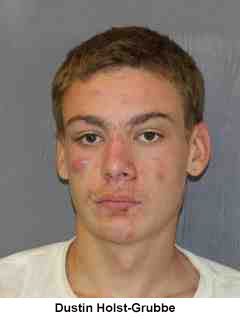 The Dutchess County Sheriff’s Office reports the arrest of Dustin Holst-Grubbe, age 20 of Millerton, in connection with a commercial burglary which occurred on 8/3/16 at the Oakhurst Diner in Millerton.

During the morning hours of 8/4/16 the Sheriff’s Office responded to the diner after employees coming in to work reported discovering a possible burglary. Investigation by Sheriff’s Office Detectives and Patrol Deputies identified Mr. Holst-Grubbe as a suspect, and he was arrested on 8/7/16. Mr. Holst-Grubbe is accused of entering the diner while it was closed and stealing cash from the register.

At this time Mr. Holst-Grubbe has been charged with Burglary 3rd Degree, which is a Felony. After being processed he was arraigned before the Town of North East Court and remanded to the Dutchess County Jail in lieu of $25,000 cash bail or $50,000 bond.

As with any criminal case, the charges described above are merely accusations and Mr. Holst-Grubbe is presumed innocent until proven guilty in a court of law. The investigation is continuing, and more information may be released as it becomes available.