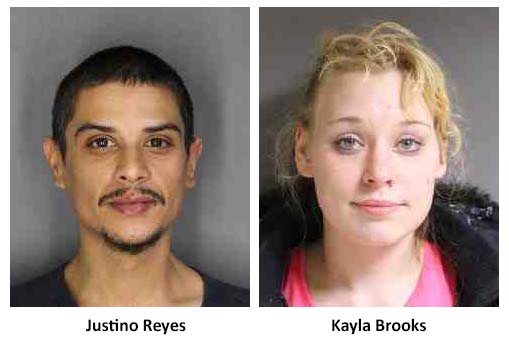 The Dutchess County Sheriff’s Office reports the arrest of two subjects in connection with a home-invasion style residential burglary which occurred in the Town of Dover at approximately 5:10 pm on 3/28/17.

On the above date and time Sheriff’s Deputies responded to a residence on Christiansen Lane in Dover for a 911 report of a burglary-in-progress in which the home was forcibly entered and someone inside assaulted. Upon arrival the suspects had left the scene, however a suspect vehicle description was given out and a vehicle matching that description was stopped by Deputies close to the scene. Further interview and investigation by the Sheriff’s Office Detective Bureau resulted in the arrest of Justino Reyes (age 38 of Poughkeepsie) and Kayla Brooks (age 21 of Poughkeepsie). The victim suffered minor injury, and although the motive is still under investigation it is not believed to be random.

At this time both subjects have been charged with Burglary 2nd Degree (Class C Felony), and after being processed both were arraigned before the Town of Dover Court. As a result of the arraignment both were remanded to the Dutchess County Jail, Ms. Brooks with $25,000 cash bail or $50,000 bond and Mr. Reyes with no bail. The investigation is continuing, more charges are possible at a later time and more information may be released as it becomes available. The Sheriff’s Office was assisted at the scene by the New York State Police.

As with any criminal case the charges described above are merely accusations and the defendants are presumed innocent until proven guilty in a court of law.