The Dutchess County Sheriff’s Office reports the arrests of two people in connection with felony offenses over this past weekend. The arrests are unrelated, and occurred during the early morning hours of 4/29/17 and 4/30/17.

At approximately 3:40 am on 4/29/17 Sergeant Neil Stuart witnessed part of an assault taking place on Main St in the City of Poughkeepsie. The suspect then fled on foot and was pursued to the area of Cannon Street, where he was taken into custody. Chad Smith, age 27 of Poughkeepsie, was charged with Assault in the 2nd Degree (felony) and is accused of striking the victim in the face with a brick. The relationship between the two is unclear, and the victim suffered substantial facial injuries including lacerations and broken bones. After being processed Mr. Smith was arraigned before the Town of Poughkeepsie Court and remanded to the Dutchess County Jail in lieu of $10,000 cash or $20,000 bond.

At approximately 2:15 am on 4/30/17 Sergeant Stuart attempted to stop a vehicle with an inoperable headlight on Washington St in the City of Poughkeepsie, and instead of stopping the driver failed to comply. After a short pursuit the vehicle stopped and the driver, identified as Frederick Mann (age 31 of Poughkeepsie), was taken into custody. Further investigation revealed Mr. Mann to allegedly be in an intoxicated condition, and it was discovered that he also had a suspended license and a prior DWI conviction within the last 10 years. At this time Mr. Mann was been charged with DWI (felony—prior conviction), aggravated unlicensed operation of a vehicle (felony), operating a vehicle without an interlock device (misd.), unlawfully fleeing a police officer (misd.), and numerous traffic infractions. After being processed he was arraigned before the City of Poughkeepsie Court and remanded to the Dutchess County Jail in lieu of $10,000 cash bail or $20,000 bond.

As with all criminal cases the charges described above are merely accusations and the defendants are presumed innocent until proven guilty in a court of law. 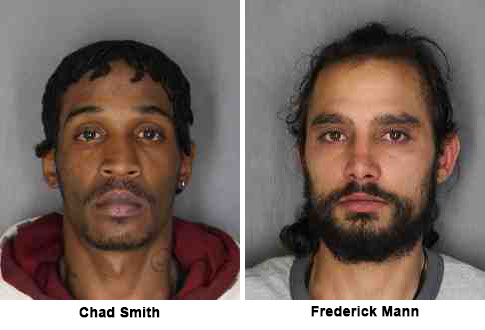