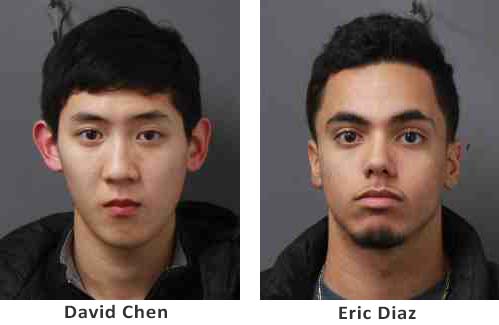 The Dutchess County Sheriff’s Office reports the arrest of David Chen (age 19 of Action, Ma) and Eric Diaz (age 18 of NYC) for felony drug possession subsequent to a traffic stop in the Town of Red Hook during the early morning hours of 2/20/17.

On 2/20/17 at approximately 2:10 am Deputies stopped a vehicle on River Road in Red Hook after the driver failed to dim the high beams for oncoming traffic, and Mr. Diaz and Mr. Chen were identified as passengers in the vehicle. Further interview and investigation led to the discovery of approximately 12 grams of suspected cocaine, after which Mr. Chen and Mr. Diaz were taken into custody for the alleged possession of it. The vehicle’s operator was identified as Kyle Davis (age 21 of Charleston, SC), and he was charged in connection with the traffic violation and possession of a small amount of marihuana.

At this time both Mr. Diaz and Mr. Chen have been charged with Criminal Possession of a Controlled Substance in the 3rd Degree (Class B Felony), and Mr. Davis was charged with failing to dim high beams (traffic infraction) and unlawful possession of marihuana (violation). All three were released on appearance tickets after being processed, and are set to return to the Town of Red Hook Court on 3/23/17.

As with any criminal case the charges described above are merely accusations, and the defendants are presumed innocent until proven guilty in a court of law.