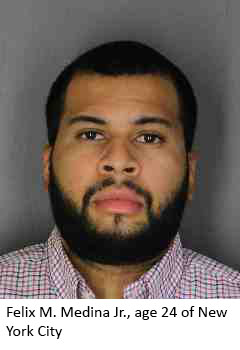 The Dutchess County Sheriff’s Office reports the arrest of Felix M. Medina Jr., age 24 of New York City, on 4/17/18 in connection with a sexual abuse investigation by the Sheriff’s Office Detective Bureau.

At this time Mr. Medina has been accused of subjecting two (2) victims – 1 adult and 1 child – to inappropriate sexual contact in the Town of Wappinger. Even though Mr. Medina’s residence is in NYC he has ties to the Dutchess County area; the victims were not random, and at this time there doesn’t appear to be any danger to the community. All further details about the case and the victims are being withheld to protect their privacy.

Mr. Medina has been charged with Sexual Abuse 1st degree (Felony) and Sexual Abuse 3rd degree (Misd). After being processed he was arraigned before the City of Poughkeepsie Court and remanded to the Dutchess County Jail with no bail. Mr. Medina is due to reappear before the Town of Wappinger Court on 4/19/18 at 5:30 pm.

If anyone has information about this case or similar incidents involving Mr. Medina they are urged to contact Detective Ben Sistarenik at (845) 486-3833. The Sheriff’s Office can also be contacted via the tipline at (845) 605-CLUE (2583) or dcsotips@gmail.com, and all information will be kept confidential.

As with any criminal case the charges described above are merely accusations and Mr. Medina is presumed innocent until proven guilty in a court of law.