The Dutchess County Sheriff’s Office Detective Bureau is seeking information regarding the 1970 homicide of Alice Susan Vrablic, a 20-year-old Wappinger resident and Ketcham High School graduate. During the summer of 1970, Ms. Vrablic was employed as a waitress at Howard Johnson’s on Route 9 in Poughkeepsie, and at the end of the summer was planning on returning to France to study Art. On the night of August 22, 1970, she left work and was given a ride to the intersection of New Hackensack Road and Route 9 in the Village of Wappingers Falls, after which she never returned home. Ten days later Alice’s body was found a short distance from her residence.

Sheriff’s Office Detectives are actively investigating Alice’s death, and anyone with information is urged to contact Detective Kate Capalbo at (845) 486-3820 or kcapalbo@dutchessny.gov. The Sheriff’s Office can also be contacted through the tipline at (845) 605 - CLUE (2583) or email at dcsotips@gmail.com, and all information will be kept confidential. 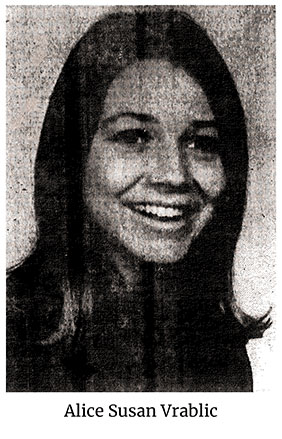