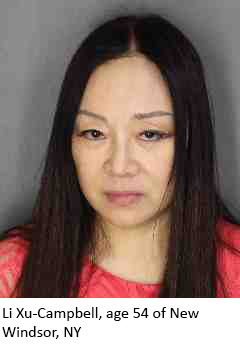 The Dutchess County Sheriff’s Office reports the arrests of Li Xu-Campbell (age 54 of New Windsor, NY) and Wang Chai Xia (age 34 of Flushing, NY) in connection with an investigation into illegal activity at Your Green Spa located at 1315 Route 9 in the Town of Wappinger.

The arrests were made at approximately 7:00 pm on 4/19/18, and are the results of a three month long investigation conducted by the Sheriff’s Office Detective Bureau. Both women are accused of offering massages without the proper licensing, and Ms. Xia is additionally accused of offering sexual contact for additional fees.

At this time both women have been charged with one count of Unauthorized Practice of a Profession (Felony under the NYS Education Law), and Ms. Xia has also been charged with one count of Prostitution (Misd.). After being processed both were released on appearance tickets, and are due to appear before the Town of Wappinger Court on 4/25/18 at 5:30 pm.

If anyone has information about this case or similar incidents involving either Ms. Xu-Campbell or Ms. Xia they are urged to contact Detective Adam Harris at (845) 486-3852. The Sheriff’s Office can also be contacted via the tipline at (845) 605-CLUE (2583) or dcsotips@gmail.com, and all information will be kept confidential.

The Sheriff’s Office Detective Bureau was assisted with the arrests by the Special Operations and Patrol Divisions of the Sheriff’s Office as well as the New York State Education Department, and more information may be released as it becomes available.

As with any criminal case, the charges described above are merely accusations and both Ms. Xu-Campbell and Ms. Xia are presumed innocent until proven guilty in a court of law.