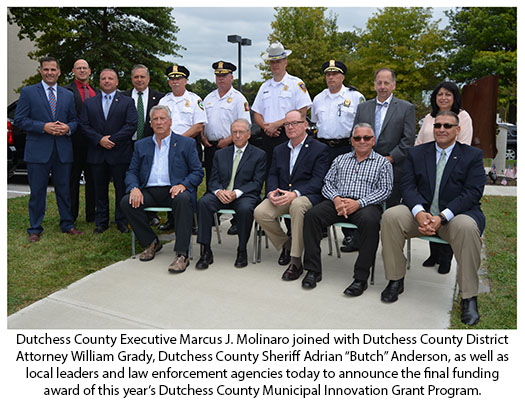 County Executive Molinaro said, “The Dutchess County Drug Task Force has been instrumental in uncovering and preventing drug crimes countywide. Our Municipal Innovation Grant Program will provide consistent funding for local municipalities and police agencies to devote resources for ongoing participation in the Task Force. As we work to address the heroin epidemic with innovative efforts such as the Stabilization Center and Substance Abuse Workgroup, the role of the Drug Task Force is more critical than ever to get these drugs off the street, ensuring lives are saved in our community.”

The Municipal Innovation Grant Program funding provides the Drug Task Force with consistent funding, alleviating the financial burden of the four participating police departments, including the City and Town of Poughkeepsie, Town of East Fishkill and City of Beacon. The Town of Poughkeepsie Police Department will be assigning a dedicated police officer to the Task Force, giving greater flexibility in providing for drug and gun targeting and investigation activities. This additional officer will increase the Task Force membership from seven to eight full-time police officers, allowing the Task Force the ability to enhance operations and increase investigations, arrests, and property seizures. Grant funding will also work to strengthen existing partnerships among local municipalities and police agencies while providing the Task Force with a new ability to train partnering law enforcement and emergency response professionals.

Dutchess County District Attorney William Grady said, “The Dutchess County Drug Task Force is vital in our anti-drug trafficking efforts, but the Task Force has been challenged because of the lack of consistent funding available for local municipalities to participate in Drug Task Force activities. This grant funding will ensure we have the necessary resources to devote to this intensive, investigative work.”

“As Chairman of the Legislature’s Public Safety Committee and as a member of law enforcement, this grant funding is critical to ensuring that illegal drugs stay off our streets and out of the hands of those who can cause harm to others. The Dutchess County Drug Task Force plays an integral role in the fight against opioids, fentanyl, and heroin within Dutchess County,” said Dutchess County Legislator Ken Roman.

The Drug Task Force is one of 37 projects included in the Dutchess County Countywide Shared Services Tax Savings Plan, submitted last week to the New York State Division of Budget.

The Municipal Innovation Grant Program was created in 2013 to incentivize municipalities, through a competitive grant program process, to consolidate services, produce shared services, eliminate layers of government, evaluate municipal consolidation opportunities and implementation possibilities, establish the regional delivery of services, and/or implement efficiency improvements. The grant program is administered under the direction of the Dutchess County Department of Planning & Development.

Nearly $1.75 million in grants were awarded for 12 projects across Dutchess County as part of this year’s grant program, ranging from a regional ambulance services study to the creation of a streamlined land use development process.  This year’s grant application was released in April and includes the following funding categories: Criminal Justice/Law Enforcement, Land Use/Economic Development and General Innovation.

View all of this year’s Municipal Innovation Grant awards