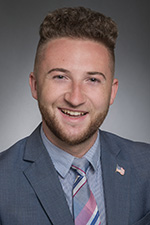 Representing the people in Wappinger

County Legislator Joseph D. Cavaccini was elected to serve the people of the Dutchess County Legislature’s 15th District in 2019. As a community advocate and appointed Wappinger Town Historian, Legislator Cavaccini has dedicated most of his life to bettering the quality of life for the people of Wappinger. Having started his public service career at age 12 in 2012, he was appointed to his position within the Office of Town Historian for the Town of Wappinger. This appointment made him the youngest person to be appointed to a post within a municipal historian's office in New York State, as well as the youngest official to serve in a public capacity in the State.

Cavaccini's love of his community started as a love for local history when he worked to recognize the forgotten hamlet of Swartwoutville by erecting signs marking the historic settlement. In 2014, he was appointed by the Board of Directors of the Sports Museum of Dutchess County to fill the vacancy of Museum Curator. He is also the Founder and Executive Director of the Friends of Carnwath Farms Historic Site & Park Inc., a community-based organization working with the Town of Wappinger to promote and preserve the town-owned Carnwath Farms Park. Cavaccini also serves as a member of the Board of Trustees for the Wappinger Historical Society, Lafayette Lodge No. 18 - IOOF, and Mount Hope Grange No. 902. He is also involved in many recreational events and programming for the Town of Wappinger. From 2017 to 2019, he served the Town of Fishkill as their Town Historian. On October 3, 2017, Cavaccini was elected to his first elected office representing the Grinnell Public Library District, which includes the Village of Wappingers Falls and Town of Wappinger. Assuming this office, made him the youngest elected official in the Town of Wappinger and the youngest at the time of taking office in New York State at 18 years old.

As a Legislator, Cavaccini serves as an advocate of county resources for the people of Wappinger as well as the town government itself (for grant funding, shared services and initiatives, etc.). He also advocates for the reconstruction of county roadways to accommodate existing traffic needs with increased communication with the public on these projects. He works to encourage smart economic development of our vacant, abandoned commercial parcels before development of undeveloped lands, including advocating for affordable housing for seniors and veterans, and limiting large housing developments that cause increased traffic and crowding in schools. He also has been a strong advocate in returning county grant funding back to the Town of Wappinger.

In his first term serving as your County Legislator, he is proud to have made much progress here in our community, even in spite of the COVID-19 pandemic. Within the first month in elected office, he advocated on the floor of the Legislature for the county to step in and provide crucial water and sewer maintenance operations to the trailer park on Cooper Road, which allowed for 50 individuals to remain in their homes after the property owner walked away. In the second month, Cavaccini and Supervisor Richard L. Thurston worked to help the displaced residents of the fire that ravaged 10 Market Street in the Village of Wappingers Falls. Through these humanitarian efforts, and the support of our great community, over $25,000 was raised to find new homes for these individuals. As we entered March our community became effected by the still crippling COVID-19 pandemic. He had the honor of serving alongside Supervisor Thurston in assisting the Town get through these tough times and launching our #WappingerStrong initiative to support small businesses who were hit hard in the greater Wappinger area.

He continues to fight for hundreds of thousands of dollars in grant funding for parks and programming in our community from the county level, funds in which the Town of Wappinger and the Grinnell Public Library District benefit by receiving, including crucial funding to develop a Community Center for all ages at the Reese Cultural Center at Carnwath Farms Historic Site & Park. He has continued to be involved in day-to-day activities within the Wappinger town government and continues to work to enhance the quality of life in our town such as rehabilitating Carnwath Farms Historic Site & Park and enhancing our hamlet centers like New Hackensack and Hughsonville. He strongly supported the new long-term agreement with the Hudson Valley Renegades, the new Yankees affiliate, to ensure that Dutchess Stadium does not sit empty; supported the establishment of a multi-use facility for recreational, educational, and healthy opportunities for youth; championed expanding county resources for mental health and opioid addiction at our one of a kind Stabilization Center; and helped DCC return to the Town of Wappinger in establishing an Aviation Maintenance Technician degree resulting in high paying blue-collar jobs.

Cavaccini is also proud that we were able to adopt a strong county budget for 2021 that continues to offer services with new initiatives such as addressing homelessness and housing, youth services, as well as continued funding for senior services, mental health, infrastructure improvements, county parks and other critical services, no layoffs, and a ZERO tax increase to property taxpayers. He serves as a member of the Legislature's Public Works & Capital Projects Committee, Environment Committee, Veterans Affairs Committee, Benefit Assessment Review Board, and Airport Advisory Committee.

Joey Cavaccini is a lifelong Town of Wappinger resident and lives on Rosewood Drive with his family. Mr. Cavaccini comes from a long line of Dutchess County residents who have lived in and been county taxpayers since 1912. Cavaccini attended Wappingers schools and is a proud graduate of Roy C. Ketcham High School. He attends Marist College and enjoys spending his free time out and about in Wappinger supporting local businesses, traversing through our local parks, and providing public tours of local historical sites and museums.