Poughkeepsie, NY- In May, Chairman of the Dutchess County Legislature Rob Rolison formed a Jail Advisory Committee tasked with meeting on an ongoing basis to receive updates from the Administration as well as the Criminal Justice Council on plans and operational details related to the Dutchess County Jail and the overall criminal justice system in Dutchess County.  The Committee led by Legislator and Public Safety Committee Chairman Ken Roman is comprised of key stakeholders including officials from both the City of Poughkeepsie and County government, Sheriff’s Office Leadership, Corrections Office Administration, and members of the Criminal Justice Council.

To address the jail overcrowding issue the Legislature took action earlier this year by approving $6.5 million to fund temporary housing units, known as PODs that will save $1 million a year in operational costs, provide for long term savings to the County, and result in better services to our inmates as well as the safety of Correctional Officers charged with the care and custody of inmates.  Attendees were updated on the Justice and Transition Center Project including the timeline for site development, current review of policy and procedures of jail operations, and analysis underway to address the needs of special inmate populations.  Having the County’s full inmate population on-site will allow for a full evaluation of the logistical, staffing and programmatic needs of those inmates. 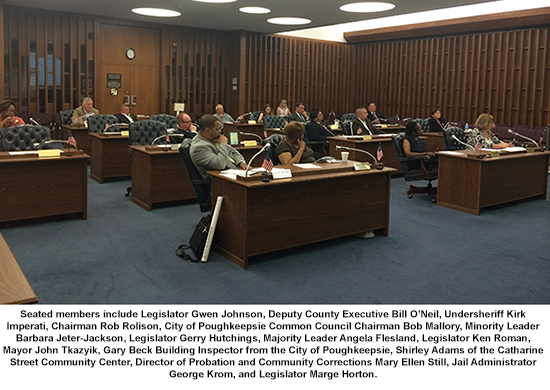 Rolison stated, “Recognizing the importance of meaningful dialogue, the Jail Advisory Committee and its members are involved in a collaborative effort to produce a Justice and Transitional Center that will be a national model.  The goal for Dutchess County is to provide our inmates with programs and transitional services which will help reduce recidivism and enhance the overall public safety in our county.  There is still more work to be done but we are excited about these opportunities and we are moving in the right direction.”