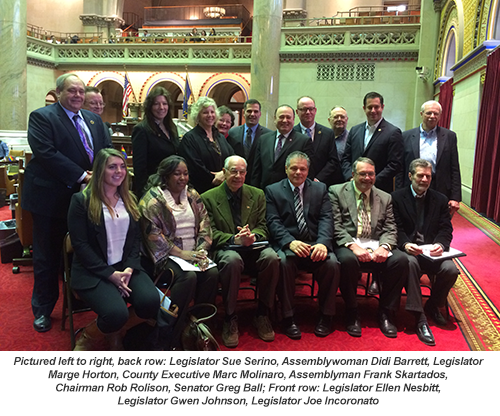 Medicaid in New York is the nation's largest and most expensive state system of public health insurance, in Dutchess County alone it costs $43,561,856 in 2014.  Legislators recommended the State apply the $2 billion surplus to offset Medicaid costs.

Pre-School Special Education program costs have grown exponentially and today Dutchess County pays 100 percent of the costs over the State mandated cap for transporting children to their service providers.  This program alone costs over $7 million, as the State looks at the potential of Universal Pre-K, pre-school special education costs need to be accepted by the State, not County Health Departments. In comparison to the County budget which is 70% mandated by the State and Federal government, this one relatively small unfunded mandate being funded by the State would result in an immediate repeal of the sales tax of home energy, said Chairman Rolison.

“We are looking for Albany to partner with us, we are not asking for anything unreasonable, just the State to pay for their programs and Dutchess County to pay for its own programs,” said Budget, Finance and Personnel Committee Chairman Dale Borchert. The Legislature’s Budget, Finance and Personnel Committee met on Thursday, March 6, 2014 with a presentation from Budget Director Sommerville with an overview of unfunded mandates and optional services as the Legislature has nearly 25% new members. Budget Chairman Borchert outlined an aggressive strategy of meeting with all non-mandated departments to find cost savings. “We want to repeal the energy tax, while it would be great to have the State work with us to make that happen and not sacrifice essential services, we understand difficult decisions will need to be made if they continue to abdicate their responsibilities,” Borchert said.

“Mandate relief would provide immediate relief for Dutchess County taxpayers and allow Dutchess County to focus on our much needed non-mandated services such as road maintenance, veterans and senior services, and public safety measures like Sheriff’s patrols and 911” concluded Rolison.